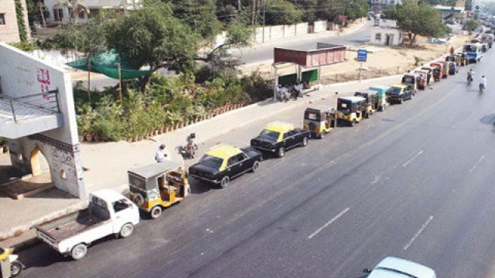 ISLAMABAD: The traffic system in the twin cities has been ruined due to long queues of vehicles at the compressed natural gas (CNG) stations.

Survey conducted by APP found that a few CNG stations were open in some localities where `gas-seeking’ motorists made two or three queues on roads resulting in blockage of traffic throughout the day. More than 80 percent CNG stations were not supplying gas, while a few were supplying CNG that witnessed long queues of vehicles causing worst kinds of traffic jam on main roads.

Massive queues of vehicles were seen at a few company-operated gas stations in the city that remained open. The commuters, mostly on way to work, faced extreme difficulties in reaching their destinations. Drivers at these stations said that they had been waiting for turn for hours but due to low pressure and heavy rush, they did not knew when their turn would come Traffic Officer told APP that citizens must cooperate with traffic wardens and park their vehicles in a single queue instead of making multiple queues in front of CNG stations. Citizens complained that situation is worst due to mismanagement and lack of proper planning on the part of higher authorities.Traffic wardens should ban second queue on roads outside CNG stations, they said. – Nation