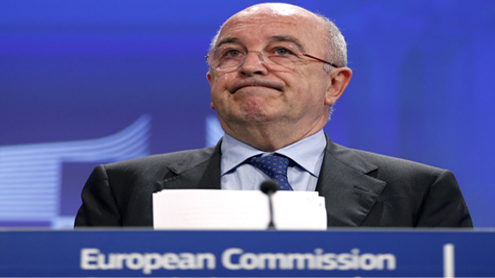 BRUSSELS: For years, some top managers at electronics multinationals would hold secretive meetings in Europe and Asia to fix the global market on the most expensive part of television and computer monitors.

Then, said the European Union’s antitrust chief, it was off to the golf course, where the executives would complete the “green(s) meetings” at which they set up a massive scam that affected millions of consumers.On Wednesday, EU antitrust Commissioner Joaquin Almunia said he got back at them, slapping the biggest ever cartel fine — over €1.47 billion ($1.96 billion) — on seven companies for allegedly rigging the international market of television and computer monitor tubes.

The EU’s Commission ruled that, for a decade ending in 2006, the companies — including Philips, LG Electronics and Panasonic — artificially set prices, shared markets and restricted their output.Almunia said the companies’ actions “feature all the worst kinds of anticompetitive behavior that are strictly forbidden to companies doing business in Europe.”Tubes were the essential part of television screens and computer monitors before they were replaced by LCD and plasma flatscreens. The cathode ray tubes accounted for up to 70 percent of the cost of a screen, the Commission said.

Almunia added that the tubes’ cost gave “an indication of the serious harm” the companies had caused. “There are victims: millions and millions of citizens.”Philips and LG Electronics, which acted jointly and separately, were fined a combined €999 million ($1.3 billion) with Panasonic punished with a €157 million ($205 million) fine, adding to more if combined fines and affiliates were included.Despite its cooperation with the Commission probe, Philips said in a statement it planned to appeal the fine since it considered it “disproportionate and unjust.”

“We regret that we are linked to this kind of behavior,” said Philips CEO Frans van Houten, as the company spoke of “alleged infringements of competition rules.”LG Electronics said it is currently reviewing the European Commission’s decision with the intention to appeal the decision.The South Korean TV maker argued that it should not be held liable for the conduct of LG Philips Display, a joint venture between LG and Royal Philips Electronics NV.LG also disagreed with the way the Commission calculated the amount of fine.

“It appears that the European Commission has calculated the fine imposed on LG Electronics partly on the basis of TV sets and PC monitors sold by LG Electronics in Europe rather than just cathode ray tubes,” LG said in a statement.Other companies fined were Samsung SDI, Technicolor, MTPD and Toshiba. Chunghwa of Taiwan escaped fines as it was the first to reveal the cartel to the EU.”It is the biggest fine for a cartel, ever,” Almunia said. The fine exceeded the previous record of the 2008 fine of €1.38 billion ($1.8 billion) in a car glass cartel.

Almunia said the tubes cartel operated worldwide and that the companies involved fully realized they acted illegally.After top management set the strategy at Green(s) meetings, lower-level company officials discussed the practical applications of the price-fixing scheme during so-called “Glass meetings,” referring to the core material of the tubes.”The participants during this period seemed very happy about the outcome,” Almunia said, citing one document that read: “Because of the success of the ‘glass meeting’ everybody has been enjoying business this year.” Not the consumer, he said.

The cartel started when the tube market was still booming but lasted even when sales dropped with the advent of flatscreens. The cartel made sure the companies kept making profits even as demand for tube screens waned.Almunia said the companies sought to keep prices as high as possible before new technologies came to the market. One document seized by the Commission gave the conspiring companies clear instructions: “Producers need to avoid price competition through controlling their production capacity.”

A separate document had a warning: “Everybody is requested to keep it as secret as it would be serious damage if it is open to customers or European Commission.” Another said: “Please dispose the following document after reading it.””Instead of competing with each other to innovate and provide the best product at the best price, they chose to conspire to artificially maintain returns in a declining technology market,” Almunia said. “This is why we fight cartels.”

He said the television and computer cartels were among the most sophisticated the EU had ever dealt with. He said they not only fixed prices, but also shared markets, coordinated capacity, output and customer allocation. In the computer monitor cartel, they even audited compliance.The Commission started its probe with an antitrust raid on the companies in November 2007. Almunia said U.S. authorities were currently investigating the case as well. – Yahoomews