Balochistan govt has no legality: CJ 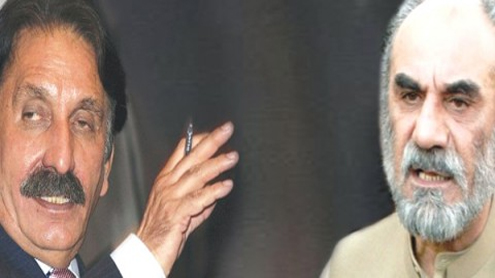 Balochistan govt has no legality: CJ

ISLAMABAD: Chief Justice of Pakistan Iftikhar Muhammad Chaudhry on Wednesday said the provincial government in Balochistan had no constitutional authority and was “ruling at its own risk”.

The Supreme Court on Wednesday announced its interim order in the Balochistan law and order case that stated that the government was responsible for providing security to the people and the federal and Balochistan governments had failed to do so. The order said the distress of families of missing persons was increasing by the day. The chief justice said the Balochistan chief minister should take the responsibility for the continued killings and disappearances across the province instead of blaming the police force.

In response, the Balochistan advocate general said if the court ordered, the provincial government could resign the very day. However, the CJ said the judges did not know what the government wanted to do. “The lawyers should read the constitution and the order,” he added.The lawyer for the provincial government, Shahid Hamid, requested the court to ask the doctors to end their strike in Balochistan. But Justice Chaudhry said why should the court pass such an order, adding that the government should first provide security to the doctors.

Hamid said a high-level committee had been set up to probe into the deteriorating security situation and the chief minister was also part of the committee. The president of Pakistan Medical Association (PMA) Balochistan said how could the doctors be on duty when their lives were in danger. Chief Justice Chaudhry said the situation in the province would not return to normal unless the government took the issue seriously.Referring to the continued killing, he questioned what had the Shia community, police and FC done wrong.The CJ said over 75 hearings had been conducted in the Balochistan law and order case, but the situation on the ground remained critical. – PT