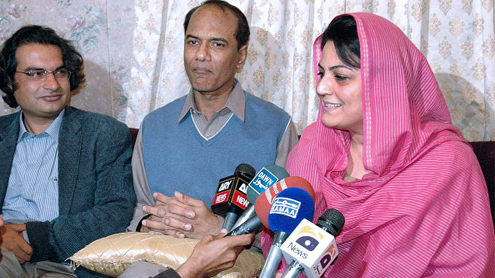 QUETTA: Dr Saeed Khan, ophthalmologist and LRBT Quetta Medical Superintendent (MS), returned home on Wednesday after being in the captivity of kidnappers for 42 days.

Talking to the media after his release, Dr Khan said that he did no know if ransom was paid for his release or who has paid it.He said that he was kept at a place for four days but he fell unconscious “after I was perhaps given something toxic in meal”.

“When I regained senses, I found myself in a room made of bricks and stones… I was given bread and water only,” he said, adding that he did not know about whereabouts of the place where his abductors had kept him. He thanked fellow doctors for playing an active role for his release and expressed his resolve to continue serving the poor. Dr Khan said that target killings and kidnapping of doctors was a grave issue.

Quetta CCPO Mir Zubair Mehmood told the media that ransom had been paid for the recovery of the kidnapped doctor. He said police were probing the matter and would soon arrest kidnappers of Dr Khan. Meanwhile, Pakistan Medical Association (PMA) Balochistan, which had been on a strike following the kidnapping of Dr Khan on October 16, has decided to continue its protest until all of its demands are met.

PMA Balochistan President Dr Sultan Tareen told the media that doctors would continue the strike as Dr Khan had been recovered after the payment of ransom and “no intervention was made on behalf of the government or security agencies”. He said that all cases should be withdrawn against doctors and suspended doctors should be reinstated. PMA Balochistan leader Dr Shahzada said the release of Dr Khan became possible after kidnappers were paid “a huge ransom and the provincial government did not play any role in this connection”.

He said the Balochistan government had failed to provide security to doctors.Balochistan Chief Minister Nawab Aslam Raisani also visited Dr Khan’s residence after his release. Speaking on the occasion, Raisani said that acts of kidnapping for ransom were against the very traditions of the province and contradictory to the law and ethics. “Such acts are unforgivable sins and culprits involved in such acts deserve strongest punishment,” the CM said. – Dailytimes

Iran ‘will press on with uranium enrichment’

Iran 'will press on with uranium enrichment'