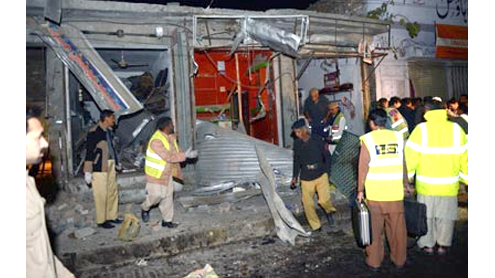 RAWALPINDI: 16 people were killed and at least 33 others sustained serious injuries in a suicide blast at a Moharram procession in Dhok Sayidan, Rawalpindi, Media reported.

According to sources, the incident took place near Qasr -e-Shabbir Imam Bargah. The suicide bomber had tried to enter the procession by barging in, on being stopped for a routine search, blew himself up amongst mourners killing 16 people while injuring more than 2 dozen others.

“The total number of dead people has now reached 16. Some 33, including nine children, have got injured,” Waqas Rehman, a spokesman for the Rescue 1122 service, told media.A hand grenade was also procured from the site of explosion.Security personnel tried their best to cordon off the area, but could not do so in time as the bereaved families and friends had refused to evacuate the site.

They chanted slogans against the government and the poor security arrangements that had been provided to them.The injured have been shifted to Benazir and CMH hospitals, several of them are in a critical condition. – Brecorder