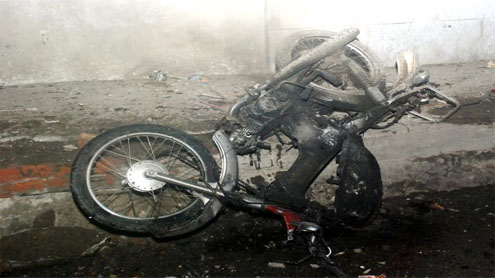 KARACHI: At least four people were killed and four sustained injuries in a rickshaw blast in Orangi Town, Karachi, Media reported on Wednesday.

The Bomb Disposal Squad said ball bearings were not used in the second blast.DIG West Javed Odho said there was no congregation held at the imambargah when the first blast took place.He told Media that the first blast occurred in a rickshaw.However, Media correspondent Nadeem Khan reported that the attack was carried out by a suicide bomber riding a motorcycle.

The reporter added that the motorcyclist crashed into a rickshaw and detonated the explosives.Bomb Disposal Squad reached the spot to determine the nature of the blast.Rescue officials shifted dead and injured to local hospitals, while police cordoned off the area.

According to initial details, the injured have ball bearings ripped into their bodies, while several body parts have been brought to the hospital as well. One of the injured is in critical condition and has been taken to operation theatre.On November 18, two people were killed and more than a dozen sustained injuries in an explosion near an imambargah in Abbas Town, Karachi.The explosives were planted on a motorcycle.This is a developing story and will be updated accordingly. – Tribune