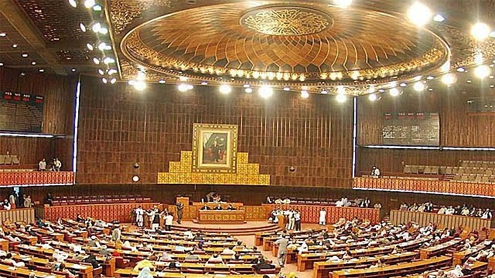 The government tabled a standing committee report on a draft of the 22 constitutional amendment bill allowing dual nationals to run for elections, amid strong protest by the Pakistan Muslim League-Nawaz and the Awami National Party in the Upper House on Monday.

The bill was passed by a Senate panel on law and justice earlier in the day.The move is seen as an attempt by the government to save dual nationality holding lawmakers from possible disqualification as the Election Commission’s November 30th deadline for lawmakers to submit their affidavits that they hold only Pakistani nationality draws nearer.

The amendment, titled the 22nd Constitutional Amendment Act, 2012 aims to substitute a paragraph of Clause (1) of Article 63 of the Constitution with: “He ceases to be a citizen of Pakistan or has acquired the citizenship of a foreign country except a state with which the federal government has a dual nationality arrangement under the law before or after the commencement of the constitutional 22nd Amendment Act, 2012.”

Interestingly, the tabling of the report was not mentioned in the agenda of the day and the abrupt move provoked opposition lawmakers who staged a walkout in protest, as well as government ally, the ANP.“I am surprised and concerned that the committee met just once and failed to evolve consensus on the bill. And the bill cleared by the committee today, with my dissent note, is different from the one presented by the committee chairman before the house now,” claimed PML-N Senator Zafar Ali Shah.

He said the original bill was the one that was referred by the house to the committee a few months back. It was tabled by the law minister in the House.ANP Senator Haji Adeel also objected rushing through the proposed legislation, saying, “If you run the house as a dictator then why don’t you bring [former president Gen Pervez] Musharraf again”He also termed it against the rules that a government legislation was presented on a private members’ day.

Meanwhile, the house also passed a resolution condemning the murder of a journalist in Panjgur, Balochistan, and asked the government and security agencies to provide security to the media. – Tribune

Real revolution only possible through evolution of democracy: President