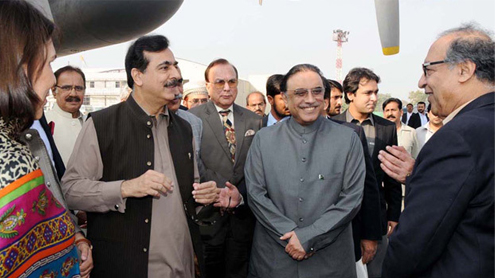 MULTAN: President Asif Ali Zardari said on Friday the government was working on a plan to challenge the disqualification of former prime minister Yousuf Raza Gilani.

The president, who had arrived here for a meeting with Mr Gilani, was addressing PPP parliamentarians and office-bearers who had gathered at the residence of the former prime minister.Federal ministers Qamar Zaman Kaira, Makhdoom Amin Fahim, Syed Khursheed Shah and Nazar Mohammad Gondal and Punjab PPP chief Manzoor Wattoo were present on the occasion.The president’s visit was apparently aimed at addressing concerns of the Gilani family about problems it has been facing.

There have been reports in recent days that Mr Gilani was feeling frustrated by the treatment meted out to him and his family by the government.But, sources close to the former prime minister insist that he is neither angry with the PPP or President Zardari nor has any complaint to make. They say the president’s visit was aimed at giving a message to elements who wanted to teach a lesson to Mr Gilani for being loyal to the party and its leadership.

The president told the parliamentarians that they would soon hear good news (about disqualification) as he was working on the matter.He said Pakistan Seraiki Party chief Taj Mohammad Langah had informed him about legal clauses under which the disqualification could be challenged.President Zardari also said constitutional obstacles relating to dividing Punjab and creating Seraiki province were being removed.

“Despite the use of different tactics by opponents of Seraiki province, we succeeded in getting a resolution passed in the Punjab Assembly. But, a constitutional amendment in this regard requires two-thirds majority.”Mr Gilani said the parliamentary commission on new provinces should be asked to submit its recommendations as soon as possible and the recommendations should be tabled in parliament without any delay.He proposed appointment of Khursheed Shah as chairman of the commission.

President Zardari said the new province would be of benefit to the region because (after its creation) powers and resources would be transferred to local people and the region would receive more funds under the National Finance Commission award.He said he had assigned the task of setting up Seraiki bank to Finance Minister Hafeez Shaikh who was working on it. “An announcement in this regard will be made soon.He called for suggestions about relief in electricity charges for farmers using tube-wells to irrigate their land and said the matter would be taken up sympathetically. He said small farmers would get another relief when their bank loans would be written off.

Speaking about the achievements of the government, he referred to successes achieved in the fight against militancy, grant of provincial autonomy, adoption of the 18th amendment, announcement of the seventh NFC Award and Aghaz Huqooq-i-Balochistan package, the pursuing and strengthening of the process of reconciliation, launching of the Benazir Income Support Programme (BISP), grant of share to workers in state-run-enterprises, giving identity to the people of Khyber Pakhtunkhwa and laws to protect women from exploitation.

He said development programme undertaken in southern Punjab would herald economic prosperity in the area and create employment for the youth.He called upon parliamentarians and PPP leaders of the area to reach out to the people to solve their problems and motivate them to enhance their participation in political process.According to TV reports, the president held a 20-minute meeting with Mr Gilani and his sons. Khursheed Shah attended the meeting. – Dawn