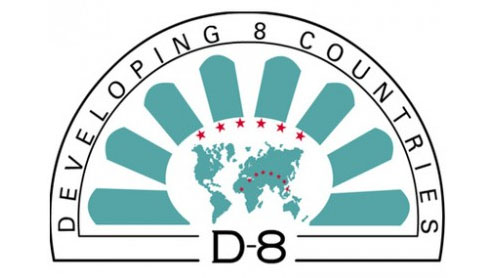 ISLAMABAD: At the invitation of the President of Pakistan, leaders of the Developing Eight (D-8) countries will meet in Islamabad on 22 November 2012 for the Eighth Summit Meeting.

The event coincides with the 15th anniversary of the founding of the D-8 and will focus on the theme of “Democratic Partnership for Peace and Prosperity”.President Asif Ali Zardari will inaugurate and chair the Summit session. The President of Egypt Mohamed Morsi, President of Indonesia Susilo Bambang Yudhoyono, President of Iran Mahmoud Ahmadinejad, President of Nigeria Goodluck Ebele Jonathan, and Prime Minister of Turkey Recep Tayyip Erdogan will attend the Summit. Malaysia is likely to be represented by Deputy Prime Minister. Confirmation of participation by the Prime Minister of Bangladesh is awaited.

Pakistan will take over the chairmanship of the D-8 for the next two years until 2014. The event is of extraordinary significance as it is poised to adopt the Organization’s Charter and its Global Vision.In a special ceremony following the Summit meeting, the leaders will witness signing ceremony of the Charter by the Foreign Ministers. The leaders will also adopt Islamabad Declaration 2012 reaffirming their joint resolve to make concerted efforts to confront common challenges.

On the margins of the Summit, President Asif Ali Zardari and Prime Minister Raja Pervez Ashraf will hold bilateral meetings with visiting leaders. The forthcoming Summit will witness visit of an Egyptian President after four decades and that of a Nigerian leader after around 28 years. The visit of D-8 leaders to Pakistan will open new vistas for expanding trade and investment relations with all D-8 countries.

Prime Minister Raja Pervez Ashraf will inaugurate the D-8 Trade Exhibition and D-8 Business Forum and on 19 and 20 November, respectively. Both events will be flagship events of the D-8 Summit to be attended by top corporate leaders from Pakistan and other members of the Group. Given the government’s efforts to promote interaction with the private sector, these business activities will provide a solid platform at which Pakistan’s public and private sector will be able to showcase wide possibilities in joint ventures and investment. The Business Forum will focus on infrastructure development, value-addition in textile sector, opportunities of joint ventures in alternate energy, engineering, and agro-based industries.

In addition to the leaders, Foreign Ministers, senior government officials, governors of central banks, heads of trade promotion organizations, business leaders and exhibitors will also participate in the main and sideline activities. Prior to the Summit, preparatory meetings of the D-8 Council of Ministers (comprising the Foreign Ministers) and the D-8 Commission will also be convened on 21 November and 19-20 November, respectively. Our Foreign Minister will chair the Council meeting.

The meeting of the governors of central banks of D-8 countries will make recommendations for cooperation on financial and monetary issues. The meeting will also discuss the impact of global economic crisis, cooperation through trade and capital inflows, and development finance.The Meeting of D-8 heads of trade promotion organizations and Trade Exhibition together with an interactive Seminar will be spread over 4 days. These events will provide an occasion to Pakistan’s private sector to exchange information on existing potential and learning about other markets.

It is Pakistan’s privilege to host the first ever meeting of the heads of trade promotion organizations of D-8 countries. A key element of the agenda is trade promotion through implementation of agreements on preferential trade and visa facilitation for businessmen. Pakistan is keen to put in place a mechanism to facilitate private sector cooperation once D-8 has finalized modalities to implement three framework agreements on visa, customs matters and preferential trade agreement. The Trade Exhibition is aimed at showcasing Pakistani products and those of other member countries with the view to highlighting their trade potential.

D-8 is a multilateral grouping of eight emerging economies of the Muslim world that represent different regions. It reflects combined population of around one billion and a market of about one trillion dollars. The member countries envisage increasing intra D-8 trade to over US$ 500 billion by 2018.

The Islamabad Summit will be a major international event in Pakistan which would contribute towards enhancing Pakistan’s image and standing. The event will highlight international community’s growing confidence in the democratic Pakistan, particularly for forging business-to-business relations and public-private-partnerships. It will project Pakistan as business destination in addition to underscoring the linkage of democracy with peace and development. The Summit demonstrates Pakistan’s strong commitment to the D-8 process and our belief in finding solutions within the framework of South-South cooperation. – Onlinenews

Pakistan , Afghanistan agree to work jointly for eradication of terrorism

Pakistan , Afghanistan agree to work jointly for eradication of terrorism