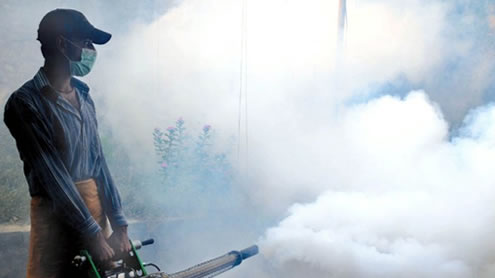 LAHORE: There is no vaccine available against dengue and the most widely used methods for its control are based on chemical agents. These agents (insecticides) harm environment, a top scientist on Monday told a workshop being held to find out techniques for identifying different stages of dengue vector’s development.

Government College University’s Dean of Faculty of Science and Technology, Prof Dr Islamullah Khan, also said there was a dire need for evolving other methods and strategies to prevent the dengue epidemic. He was addressing the opening day gathering of the five-day workshop titled ‘Prevention and Control of Dengue Vectors,’ which kicked off at Government College University (GCU) Lahore under the auspices of Higher Education Commission and GCU’s Zoology Department. Some 600 zoologists and entomologists from across the country are taking part in the workshop. They are seeking a platform for teachers, scientists, students and researchers to find out new techniques and research on breeding of the dengue vector.

Allama Iqbal Medical College’s former principal, Dr Javed Akram, said that epidemiological data showed that the dengue pattern in Pakistan was different from the rest of the world as it had hit more men than women. “It is also found that a large number of dengue patients in Pakistan have developed a natural immunity against the virus, but this immunity is not likely to stand for long as they might get infected again.” Prof Javed Akram said that body fluid management plays a vital role in saving life of a dengue patient.

Vice Chancellor Prof Dr Muhammad Khaleequr Rahman, who chaired the inaugural session of the workshop, said the government was not allocating adequate resources to universities for research to control dengue vector and protect citizens from the deadly disease that kills more than 25,000 people every year in the world. He said that there was a continuous need for taking tangible measures to ensure that in the future the risk of the disease was minimised. He hoped that the workshop would create an opportunity for extending research collaborations with other universities and organisations the field of medial entomology.

Prof Dr Nusrat Jahan recommended biological control of dengue, saying that mosquitoes in Pakistan had developed resistance against the chemicals used in fumigation and sprays. She said that biological control or “bio-control” was the use of natural enemies to manage mosquito populations with a minimum risk to humans, wildlife and the environment. “The use of biological agents includes predatory insects and other invertebrates, such as copepods, parasitic nematodes, larvivorous fish, and microbial entomopathogens including Bacillus thuringiensis.

As many as 18 lectures on topics including “management of dengue patients,” “morphological and mode of transmission of dengue virus,” “study of development stages of mosquito” and “methods of filed collection of adult mosquitoes” are part of the workshop that was spread over 12 technical sessions. – Dailytimes

Xulfi and his young lot of Music Masters