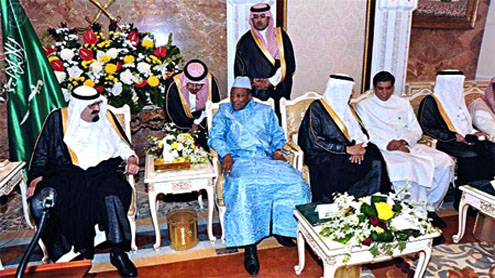 The Saudi king felicitated the PM on performing Hajj. The premier also held a detailed meeting with Crown Prince Salman bin Abdulaziz Al Saud and discussed matters of mutual interest.Prime Minister Raja invited the crown prince for a visit to Pakistan which was accepted by the Saudi dignitary. The prime minister congratulated the crown prince on the best arrangements made by the Saudi government on the occasion of Hajj.

Senior scholars, ministers, the secretary general of the organisation of Islamic Cooperation, the secretary general of Gulf Cooperation Council (GCC) states; senior officials and ambassadors of other Islamic countries were also present.Addressing the ceremony, King Abdullah said that from the holy shrines, the sacred shrine of Mina, and from the neighbourhood of Arafat, from these holy sites, where Talbya, Takbeer and Tahleel echo, and from the vicinity of the ancient house where pilgrims perform Hajj rituals, from this land where faith has prevailed.

I congratulate you and all of the Islamic nation, praying to Allah to accept Hajj from all who came to this sacred House, and forgive all their sins, and to return them safely to their homelands, after Allah Almighty has honoured them with the performance of the fifth pillar of Islam and the honour of standing in these sacred places, holding firmly to the guidance of the Holy Quran and Prophet Muhammad (PBUH)’s Sunnah,” he added. – Dailytimes