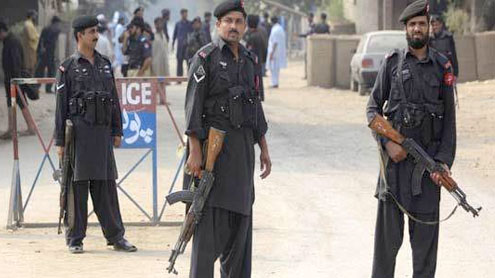 PESHAWAR : Destruction of vehicles by militants and misuse of many by bosses have stressed out Peshawar police, which are already struggling to counter terrorism and targeted attacks on their interests.

Under these circumstances, they are seen using school vans for official duty.Some school owners have told Dawn that police take away their vans after forcing female teachers and students to get down.A portion of the Malik Saad Khan Police Lines has been turned into a junkyard of damaged and destroyed vehicles.According to official record, at least 25 vehicles of different models have been destroyed by bomb blasts in parts of Peshawar district over the last few years. Some of them are irreparable.

Irreparable costly double door trucks have been transported to SNGD in large numbers for replacement. However, no replacement has been made until now.Police officials, mostly posted to rural areas, said shortage of vehicles had adversely affected their performance.However, an official said there was no shortage of vehicles.“Actually, senior officers don’t hand over vehicles to police stations,” he said. There are also complaints of fuel unavailability with officials claiming that petrol and diesel supply to police stations is almost none.

They said police stations had to arrange fuel for vehicles themselves.“Fuel unavailability negatively affects patrolling. We patrol in emergency only,” an official said.Officials said another problem was long delay in repair of faulty or damaged vehicles.“In case of any fault, we send vehicles to the police lines for repair but it usually take so long that we are left with no option but to avoid duty, hire private vehicles or impound school vans,” he said.

An official said even the armoured personnel carriers (APCs) had been out of order which were direly needed by them particularly in the night duties and they had to repeatedly request for the early repair.However, in charge of the transport workshop Burhan Khan said police had no workshop in the police lines but the entire fleet of vehicles totaling between 300 and 400 was repaired through private mechanic.“We have to go through an official process by floating tenders in the newspapers and pay the money/bills with approval of relevant officials, treasury after meeting the requirements,” he said.

He rejected the complaints about delay in the repair process and said ‘first come first serve’ policy was tightly intact since the begging but in emergency situation the vehicles of most sensitive areas are given priority on directives of the high ups,” he said.The vehicles in the use of slain SPs Abdul Kalam Khan, Khurshid Khan in Dir and Khurshid Khan in Peshawar, DSP Abdur Rasheed Khan were fully destroyed and one could buy new vehicle on the cost of its repair.

About the repair of the APCs, he said in Peshawar there was no mechanic of APC in Peshawar and they had request someone in Islamabad, saying its mechanical system was so complicated that local mechanic could not repair them. Similarly, he said militants usually targeted the APCs’ tyres but the tyres were also not available in the local market.“We have to keep contact with the dealers in Karkhano Market for bringing tyres from Afghanistan and the higher rates fixed by dealers at their own free will,” he added.

When contacted, SP (headquarters) Javaid Khan said there was shortage of vehicles and police had requested the relevant quarters for the same but it would take time.“We provide substitute vehicles to the police stations in case of emergency. He said police officials in the police stations should avoid misuse of vehicles in their personal interests and maintain them only for official duty.“These are not for shifting firewood or other items of the personnel but for the police patrolling only,” he said.He said police should be provided with required vehicles without delay so that their patrolling teams could cover all areas of the city alike. – Dawn