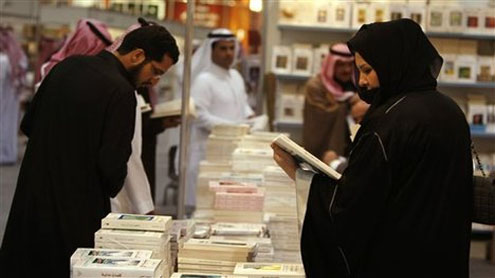 This year’s Sharjah International Book Fair, slated to begin on November 7, will have Pakistan Focus as its theme, organisers said on Tuesday.

Twenty-five authors including popular writer Wasi Shah and about 23 publishers from Pakistan will be participating in the event,” said Mohan Kumar, coordinator of the book fair.Internationally acclaimed Indian author and Man Booker Prize winner Arundhati Roy will be attending the fair along with other prominent Indian authors including William Dalrymple, actors Anupam Kher and Deepti Naval, Pankaj Mishra, HM Naqvi, Paul Zachariah, Vidya Shah and several others, CEO of DC Books Ravi DC announced.  Arundhati Roy will be in conversation on her first book ‘The God of Small Things’ on November 9 at 8.30pm.

The organisers said 25 per cent of the participation in the fair that last year was from the Indian sub-continent. “We are expecting this to increase to at least 35-40 per cent in the coming years,” added Ravi DC. Publisher participation from India has also doubled compared to the previous year. The participation of the National Book Trust, India, is the key highlight of this year.

The 11-day annual fair is currently the sixth biggest literary festival in the world. Organisers said that the main aim of the fair is to encourage the younger generation into the reading habit.Kumar said: “The fair is not a commercial establishment, but purely a cultural event. A wide display of books will be sold at affordable prices.  Parents must realise that a reading child is an asset.” Due to overwhelming response from schools, sessions with authors will be held exclusively for students at 10.30am on all days.

Other Indian authors participating at the fair include Benyamin, Namita Gokhale, Samrat Upadhyaya, Tahmima Anam and Shehan Karunatilaka. Authors from Nepal and Sri Lanka will also be presenting their titles at the fair. – Khaleejnews

Telenor results ahead of forecasts on strong Nordics

Telenor results ahead of forecasts on strong Nordics