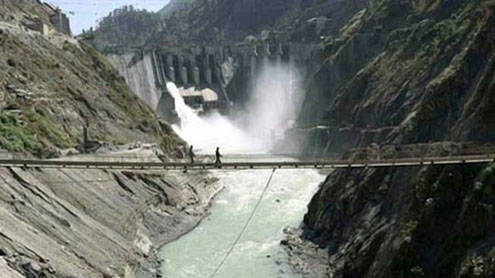 LAHORE: The 4,500MW Diamer-Basha Dam Project is being implemented on priority, as the federal government has allocated about Rs 13.78 billion for the project during the fiscal year 2012-13.

He said the process to acquire land for the project both in Gilgit-Baltistan and Khyber Pakhtunkhwa had also being started, while a sum of Rs 6.85 billion had been paid to the respective governments till June 2012 for the purpose.Raghib Shah said the multi-purpose dam would usher in an era of prosperity and development in the country, particularly in Gilgit-Baltistan. He said that a lucrative compensation package for affectees of the project had been devised in accordance with international standards.

The Gilgit Baltistan ministers assured WAPDA Chairman of their full support in implementation of the project, besides, discussing the matters relating to the project, they also apprised him of demands of the local people. The Chairman said that WAPDA would look into the matter sympathetically within the rules.It is pertinent to mention that Diamer Basha Dam Project is located in Gilgit-Baltistan and KPK.On completion, the project will store 8.1 million acre feet of water in addition to generating about 20 billion units of low-cost hydel electricity every years. – Brecorder