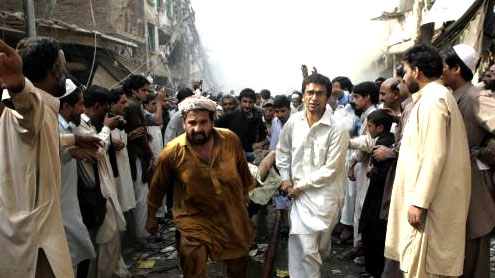 However, police, the likely target, remained unhurt.According to police, two bombs planted by suspected militants along Bara-Shaikhan Road went off at around 7am.A police official said it was a very sensitive area, where policemen had a heavy deployment to block entry of suspected militants from adjoining Khyber Agency.He said police seemed to be the target of the blasts but they missed it.

Local police said an explosive device weighing around four kilogrammes and placed in gee canister was used in each blast.During the last one and a half months, Frontier Road and Bara-Shaikhan Road saw at least 10 explosions, including one, which claimed the life of noted bomb disposal expert Hukam Khan.The third blast took place at Scheme Chowk in the limits of Badbher police station at around 8pm.The blast targeted a music centre, which was destroyed completely. Three people, including owner of the centre, Bashir Khan, was also injured in the blast.

An official of Badbher police station said all the injured were shifted to Lady Reading Hospital, where one of them was stated to be in critical condition.He said dozens of music centres and CD shops had been blown up by suspected militants during 2008-09 and the last bombing took place in Bahadur Kili area in 2009 forcing owners to shut down businesses.However, music shops later resurfaced in some areas close to the city.

The official said preparations had been made for an operation against militants in the outskirts of Peshawar and additional police force with heavy weapons had been deployed at the most sensitive checkposts for timely response to future attacks.He said senior policemen deployed at different offices in the cantonment and city areas had been replaced with under training cops because the junior people belonging to other districts didn’t know about the city’s important locations and sensitive entry points.He said paramilitary forces would back police during the operation to be carried out mainly in limits of Mattani and Badbher police stations.  – Dawn