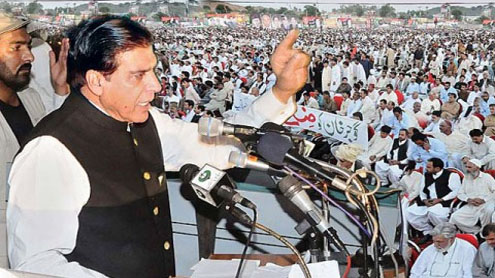 GUJAR KHAN: Prime Minister Raja Pervaiz Ashraf said Sunday the Election Commission of Pakistan (ECP) had been made independent and arrangements had been made to ensure that the elections would be fair.

He declared Pakistan People’s Party would sweep the next general elections as it has solid development work to its credit and unflinching support of millions of workers across the country.The prime minister also announced a series of mega projects of Rs 12 billion for the area, as the workers raised slogans of ‘Jeay Bhutto’.

He directed removal of the security bulletproof glass as he arrived for address at the dais and said he does not want any barrier between him and the masses. The prime minister said PPP has always been victimised in the past and mentioned the landmark decision by the Supreme Court in the Asghar Khan case.

He said it has been admitted during the proceedings of the case that the elections were rigged to defeat the PPP. He said this public gathering should serve as an eye-opener to those who have been conducting a media trial of the party. The prime minister regretted reports that ‘Shaheed Benazir Bhutto was treated as a security risk’.

He said the Shaheed leader was targeted unsuccessfully in Karachi soon after her arrival, but the enemies managed to finally target her in Rawalpindi.He said the only fault of Shaheed Zulfikar Ali Bhutto was to give a voice to the downtrodden and the common man, who had no standing in the society.

“Was it a crime to give a voice to the rejected,” the prime minister questioned.“Was this the reason that Benazir Bhutto had to sacrifice her life,” he said and added “Now Bilawal, Bakhtwar and Aseefa also ask the same question that what was the fault of their mother.”He regretted the polling of bogus votes in the past and said over 125,000 bogus votes were cast in every constituency, but this gathering has proved that the PPP remains as popular as ever across the country.

He said the time of fraud and bogus polling has come to an end and no fraudster would be allowed to cast fake votes ever again.“No matter if you hatch conspiracies, but remember that in the forthcoming general elections even your deposits will be forfeited as the PPP will get a resounding success,” he said as the workers raised slogans.

The prime minister who interspersed his address in Urdu with sentences in the Pothohari language, much to the pleasure of the people, announced a number of development schemes for the Tehsil. He announced an IT University and a computer lab at all schools and colleges all over the Tehsil.Raja announced upgradation of Tehsil Gujar Khan to District, and said he has already talked to Chief Minister Shahbaz Sharif in this regard.

He said the party would sweep the polls easily as it has served the masses and did unprecedented development work. He said the series of work that the party has done cannot be matched by anyone, neither in the past nor anyone can match in the future.The prime minister also asked those who conduct surveys based on a sample of mere thousands, need to come and visit the venue and see for themselves that the party has deep roots amongst the masses.He shared a message of President Asif Ali Zardari with the people and said he said he has given all to the region and its people and now it was time for the people to pay back. – Nation

He said it was a pledge of the people of Gujar Khan who vividly remember that Shaheed Benazir Bhutto was martyred in Pothohar and said the people of the area would avenge her death by extending full support to the PPP.The prime minister paid rich tributes to President Zardari and Chairperson Bilawal Bhutto Zardari for giving an ordinary worker like him a chance to serve at the country’s highest slot.

“It is for the first time that a worker belonging to middle class has risen from the ranks to this position and this is something only the People’s Party can do,” he said.The prime minister said the nation and the party stood along with their security forces like a solid rock and would not let anyone threaten the country.