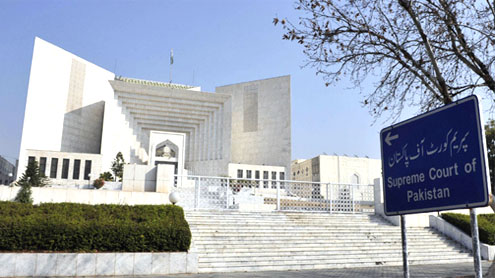 ISLAMABAD: The Supreme Court on Friday ruled that the petition filed by Air Marshal (retd) Asghar Khan, over the ISI’s distribution of money to politicians, was admissible for regular hearing and ordered the government to take legal action against former army chief Mirza Aslam Beg and the ISI’s former director general Lt-Gen (retd) Asad Durrani.

A three-judge bench comprising the chief justice, Justice Jawwad S. Khawaja and Justice Khilji Arif Hussain issued the short order after hearing a petition filed in 1996 by Khan requesting the court to look into allegations that the Inter-Services Intelligence had financed many politicians in the 1990 elections by dishing out Rs140 million to create the Islami Jamhoori Ittehad (IJI) and stop Benazir Bhutto’s PPP from coming to power. The petition was based on an affidavit of Durrani.

The Supreme Court in its short order ruled that there was ample evidence to suggest that the 1990 elections were rigged and that a political cell maintained by the then president Ghulam Ishaq Khan supported the formation of the IJI to stop a victory of the PPP. The ruling said Ghulam Ishaq Khan, Beg and Durrani violated the Constitution.“Late Ghulam Ishaq Khan, the then President of Pakistan, General (R) Aslam Baig and General (R) Asad Durrani acted in violation of the  Constitution,” said the apex court, adding the federal government should take “necessary steps under the Constitution and Law against them.”

Stating that corruption was carried out in the 1990 election, the ruling said that the president, the army chief and the ISI’s director-general were not authorized to constitute an election cell. It added that the state should implement its authority through the elected representatives of the people.

The Election cell “was aided by General (R) Mirza Aslam Baig who was the Chief of Army Staff and by General (R) Asad Durrani, the then Director General ISI and they participated in the unlawful activities of the Election Cell in violation of the responsibilities of the Army and ISI.”The apex court moreover ruled that political cells of the Inter-Services Intelligence (ISI) and President House should be abolished and ordered the government to take legal action against the former retired generals who were involved in the corruption as well as against Younus Habib, former president of the now defunct Mehran Bank.

The court further ordered that money that was illegally disbursed among the politicians by the then president and the ISI should be recovered and deposited in the Habib Bank along with the accumulated interest on it. Adding to that, the short order said that legal action should also be taken against the politicians who received the money.“Mr. M. Younas A. Habib, the then Chief Executive of Habib Bank Ltd” … “arranged/provided Rs.140 million belonging to public exchequer, out of which an amount of Rs.60 million was distributed to politicians,” added the short order.

The ruling further said that Federal Investigation Agency (FIA) should investigate into the matter, adding that, if evidence is found against anyone, action should be taken against them.Moreover, the Supreme Court, in its interpretation of the Constitution, said that political activism was not the domain of the military and the intelligence agencies. Their job is to cooperate with the government, the judgment said.

During the hearing, Attorney General Irfan Qadir began presenting his arguments.Qadir said he was representing the federation and the defence ministry.Responding to which, Chief Justice Iftikhar directed Qadir to produce the document enabling him to represent the defence ministry.The attorney general said he would try to assist the court to the best of his abilities “in the short time that was available” to him.Qadir criticised the judiciary upon which the bench expressed its displeasure.

The attorney general said he had reservations over comments alleged to have been made by Justice Khawaja.“Justice Khawaja said the Pakistan People’s Party government had failed to perform in the past four years,” Qadir said.Upon which, Justice Hussain said: “You should not name a particular judge. Those were the remarks of the bench.”The attorney general requested the bench to exclude the concerned remarks from the record of the case.Qadir added that judges had taken oaths under the PCO in the past and had also allowed the military to step in, in violation of the Constitution.

The attorney general moreover said that the Asghar Khan case had been pending for the past 15 years and blamed the judiciary for the delay.He further alleged that “the present judiciary” wanted to “destabilise the government”.The chief justice remarked that Rs140 million had been given out by Younus Habib, who headed the now defunct Mehran Bank, and asked as to who was responsible for that.He further said that evidence suggested that the money was distributed at the behest of the presidency, adding that, prima facie the President House was involved in the operation.

Upon which, the chief justice said that the Constitution entitles the president, not the prime minister, as the head of state.The attorney general added the parliament had on several occasions saved the judiciary from embarrassment.Chief Justice Iftikhar said the judiciary would not allow derailment of democracy in the country.

He further said that former interior minister Lt-Gen (retd) Naseerullah Babar had also revealed that money was distributed to politicians to manipulate the country’s politics, adding that, it was allegedly done in the greater national interest.The attorney general said those involved in the decisions of the past were important personalities, adding that, the individuals who were accused of receiving the money should also be heard. – Dawn