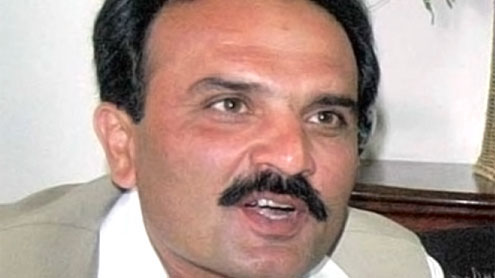 PESHAWAR: Khyber Pakhtunkhwa Chief Minister Ameer Haider Khan Hoti on Tuesday called for decisive, practical measures to eliminate militancy and terrorism from the country, and stressed the need for national unity in this respect.

Addressing a function organised here at Nishtar Hall to mark the second death anniversary of Mian Rashid Hussain, son of provincial information minister Mian Iftikhar Hussain, Mr Hoti said people had been sensitised to the need for countering militancy and terrorism and the time had come to take decisive and practical measures in this respect.“We have no personal enmity with anyone. Those wanting to live with peace and supporting education are our friends, while those spreading terror in society by attacking schools, girls and places of worship are our enemy,” he said.

He said the government would make no compromise on peace, education, rights of people and was ready to give all kinds of sacrifices for the country.He said people wanted education, peace and employment and were against terrorism. The chief minister said had the concerns of ANP on terrorism been taken seriously in the past, the security situation in the province would have been different altogether.

He said the ANP leadership and workers had rendered great sacrifices in war against terrorism and were ready to do so in future, too. Paying tribute to Main Rashid Hussain and other victims of militancy, he said sacrifices of these people would not go to waste.

“Today, we have gathered here to pay tribute to those who sacrificed their lives for our future,” he said. Mr Hoti called for national unity to effectively counter terrorism and militancy.He announced Rs20 million for Main Rashid Hussain Shaheed Foundation and expressed the hope that philanthropists would also give donation to it for well-being of the ailing humanity.Senior Minister Bashir Ahmad Bilour, who was also in attendance, said Pakistan and ANP had paid a heavy price for peace in the shape of the death of around 38,000 people and law-enforcers and injury and displacement of thousands.

He said child activist Malala Yousafzai was shot for raising voice for girls’ education, peace and tolerance in the society.The minister said some elements were trying to gain political advantage from the attack on Malala Yousufzai and her class fellows and that was unfortunate. He said attack on Malala should be openly condemned and political point scoring over it should be avoided. Terming war against terrorism the country’s own, Mr Bilour said Pakhtuns were ready to fight militants for the next 1,000 years for peace if a need arose. He said ANP always considered drone attacks by the US violation of international human rights laws and against Pakistan’s sovereignty.

The minister said PTI chief Imran Khan had led a peace march to Tank against drone strikes but never took out rallies to Peshawar to express solidarity with hundreds of people killed in bomb blasts and suicide attacks. He said confusion about whether war against terrorism was the country’s or others should not be created.

“The elements and political parties, which don’t consider it our own war, should remain silent,” he said. Mr Bilour said attack on schools, girls, women, funerals and mosques clearly indicated that the nation would have to fight the menace until its complete eradication for survival. He said the government would take strong action wherever terrorists were found.

The minister said people were politically mature and knew about right and wrong.He said terrorist attacks like on Malala and Peshawar SP Khurshid Khan could not shake the government’s resolve to fight militancy and terrorism. He said peace in Swat had been restored and tourism revived. – Dawn