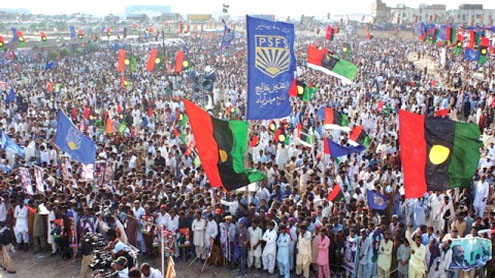 HYDERABAD: The Pakistan Peoples Party held a rally on Monday in support of the Peoples Local Government Act (PLGA)-2012, which has received a strong condemnation not only from the nationalist parties but also from ruling party’s partners and even from its own ranks.

The nationalist parties, who term this legislation a conspiracy to divide the province along the rural-urban lines, observed Monday as a day of mourning against the PLGA. On their call, business activities remained suspended in several towns and districts across Sindh.Interestingly, most of the PPP leaders who addressed the rally sought to bash the Pakistan Muslim League-Nawaz (PML-N) and the nationalists than defending the law they had pushed through the Sindh Assembly to, what it’s angered partners say, ‘appease’ the Muttahida Qaumi Movement (MQM).

The prominent among the speakers were former Prime Minister Yousaf Raza Gilani, Information Minister Qamar Zaman Kaira, Amin Fahim, Sindh Chief Minister Qaim Ali Shah, Sharjeel Memon, Agha Siraj Durrani, Moula Baksh Chandio, and Nisar Khoro.Addressing the rally, CM Qaim Ali Shah said: “Nawaz Sharif is trying to use Sindhi leaders but he will get nothing out of it.” Nawaz opposes PPP because it talks about the poor people of Pakistan, he said, adding: “PPP restored thousands of employees expelled by Nawaz government.”

The PPP, he claimed, had given sacrifices for the people of Sind and it was stronger than the nationalists. Defending the LG Ordinance, Qaim said some people were indulging in opposition for the sake of opposition and had no solid argument.Moula Baksh Chandio criticised the Sindhi nationalists for joining hands with PML-N and Jamaaat-e-Islami. “Are PML-N, JI and ANP nationalist parties,” he questioned. “No one can finish PPP if Nawaz Sharif’s guru Ziaul Haq failed to do it.” He said the opponents of PPP should watch today’s gathering and realise that conspiracies against PPP have failed. “Bhutto and Sindh cannot be separated,” he said.

Sindh Information Minister Sharjeel Memon came down hard on Nawaz Sharif and said Nawaz group is always busy in doing propaganda against the PPP. He said pseudo nationalists of Sindh were being used by Nawaz. “Political orphans are gathering under the ambrella of Nawaz Sharif for their petty interests but all these elements will fail,” he said.Sharjeel alleged that nephew of PML-N leader threw crackers at the houses of PPP leaders. “Today conspiracies to eliminate PPP from Sindh will die down.” He said PPP will not hand over people of Sindh to “extortionists and blackmailers”, adding that nationalists also opposed Benazir Bhutto.

Former Prime Minister Yousaf Raza Gilani also addressed the rally. He appealed to nationalist leaders to come to the negotiating table and assemblies to express their views. “You cannot change people’s opinion at gunpoint.” He said those who are talking about the division of Sindh were living in the fools’ paradise. Gilani claimed that the PPP was the only national party in the country and its workers would not let Sindh to be divided.

Gilani praised the leadership of Asif Ali Zardari and said Zardari raised the voice for unity of Pakistan. He said when PPP took over government Pakistan was on the verge of disintegration and PPP government saved the country. Enumerating the achievements of the PPP, he said present PPP government restored the 1973 Constitution of Zulfikar Ali Bhutto and presented the Benazir Income Support Programme.

Qamar Zaman Kaira said people of Pakistan supported the policies of PPP and that was why PPP had won the by-elections in every part of country. “When PPP took over the government 4 years back Pakistan was at the verge of disintegration. Benazir Bhutto had been murdered, Waziristan and Swat were under the control of Taliban and no Pakistani flag was seen in Blaochistan.” PPP govt introduced unanimously NFC Award and passed the 18th Amendment, he said. “Pakistan was burning and terrorism was at its peak and PPP saved the country from all the crises,” he said.

Agha Siraj Durrani said those who are opposing the Sindh LG Ordinace have not even read it, adding these people accept the LG system given by dictators by are opposing the system introduced by a democratic government. – Nation