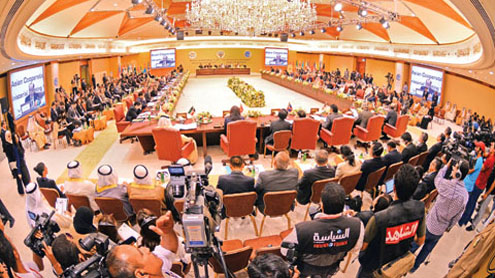 KUWAIT CITY: Prime Minister, Raja Pervez Ashraf will arrive here on Monday on a three-day visit to attend the First Summit of Asian Cooperation Dialogue (ACD). During his stay, the Prime Minister will have an audience with the Amir of Kuwait, Sheikh Sabah Al-Ahmad Al-Jaber Al-Sabah and  Kuwait’s Prime Minister, Sheikh Jaber Mubarak al-Hamad Al-Sabah.

The Prime Minister will also interact with other world leaders on the sidelines of the Summit.Minister of State for Foreign Affairs, Nawabzada Malik Amad Khan and other senior officials from the Ministry will accompany the Prime Minister.This is Prime Minister’s first visit to Kuwait since assumption of office earlier this year. The invitation to participate in ACD Summit by Kuwait government underscores the important role of Pakistan in Asia.

Participation by the Prime Minister provides an important opportunity to interact with Kuwaiti leadership and discuss ways to further strengthen political, cultural, economic, business and trade relations.The ACD was created in 2002 to promote Asian cooperation at a continental level and to help integrate separate regional cooperation organizations such as ASEAN, SAARC and GCC.The organization currently comprises 31 states including all current members of ASEAN, ECO and the GCC. The ACD Summit is the initiative of the Amir of Kuwait.

Pakistan and Kuwait enjoy extremely cordial and brotherly relations. These bilateral political, cultural, historic, and religious ties have further been strengthened by leadership level visits.The two countries enjoy growing trade relations and the volume of bilateral trade has crossed US $ 2.5 billion.Kuwait is home to over 120,000 large Pakistani community working in diverse positions as doctors, engineers, bankers, businessmen, teachers and labourers and making valuable contribution towards socio-economic development of both Pakistan and Kuwait.  – APP