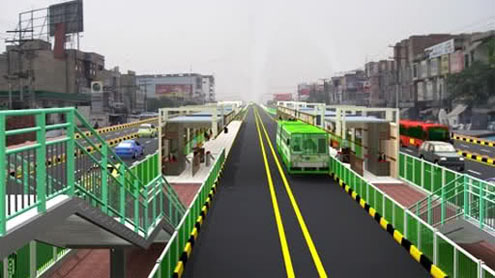 LAHORE: Punjab Chief Minister Shahbaz Sharif said on Sunday Metro Bus Service (MBS) would be free for people during the first four weeks of its opening.

The chief minister visited the site of MBS project and reviewed the pace of construction work.Calling MBS a “splendid” project in the transport history of Pakistan, he said completion of the project would result in modern, affordable and rapid transport facilities in Punjab.He said the project would soon be opened to the general public and the fare of service would be within the reach of common man.The chief minister said that construction work on the project should be continued round the clock as “there is no room for delay in its completion”.

Separately, speaking to intellectuals, writers, poets and columnists from all the four provinces, the chief minister said Balochistan issue is “very complex” and there is need to redress grievances of the Baloch.“The murder of Nawab Akbar Bugti during Musharraf era was a great disservice to the people of Balochistan,” he said.He said that the Pakistan Muslim League-Nawaz (PML-N) has always expressed solidarity with the Baloch.

According to the chief minister, the prevailing situation in the country is “critical” and Pakistan’s image is being tarnished. He said that despite being a nuclear power, Pakistani rulers are running around the world with a begging bowl.“Federal rulers have set new records of corruption and ruined the country,” he said, adding, “Extremism, corruption and load shedding are the major issues facing the country.”Shahbaz said that there is need to adopt a “national thinking” on national issues. He said that if decisions were not made in the national interest at this stage, there would be “nothing left but sorrow and remorse”.

The chief minister said the role of intellectuals, writers and poets is very important at this stage as they can provide guidance to rulers and people.“Bloodshed in the name of religion will have to be stopped,” he said, adding that Daanish schools are helping curb extremism in society.“Pakistan has sacrificed 40,000 lives in the war against terrorism. Daanish schools are ‘bullet of education’ through which extremism can be defeated,” the chief minister said.

He said that children from poor families are being provided better educational facilities at Daanish schools than those available at Aitchison College. He said that by setting up Daanish schools, the Punjab government has tried to remove injustice and deprivation in education sector.The chief minister said that if the elite did not mend their ways, destiny of the country could never be changed.

He said Germany, Japan and Turkey have achieved a respectable status in the comity of nations through hard work and resolution of their mutual disputes.“It is unfortunate that we are still involved in petty disputes. There is need to evolve a joint agenda with consultation of all stakeholders on national issues,” he said. – Dailytimes