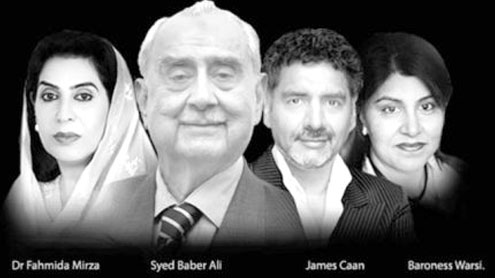 LAHORE: Wateen Telecom CEO Naeem Zamindar and Zouhair Khaliq, member Wateen Board of Directors, were recently honoured at the Pakistan Power 100, a forum recognising the most influential Pakistani men and women internationally, whose exceptional work makes an enormous and essential contribution to the wealth, health and intellectual well-being of their respective countries.

They are the only members from the country’s telecoms community to have been bestowed this honour. The final awards ceremony for the Pakistan Power 100 was held in London with hundreds of dignitaries from the international Pakistani community in attendance. In any society the presence of highly successful figures able to create and exercise a wealth of power and influence is a fundamental necessity.

These individuals are leaders, able to steer opinion and action towards the most positive possible outcomes in economic, social or cultural contexts. They are people who, either through position or personality exercise a significant power that influences events and sets parameters in the conduct of their organisation, the climate of political debate and the shaping of new ideas. The event also played host to a multitude of non-Pakistani invitees who came to show their support for Pakistan and the British Pakistani community.

The ceremony was attended by over 700 of Britain’s leading Pakistani personalities. Many leading Pakistanis from across the world, including Abdul Sattar Edhi, Mona Kasuri, Tehmina Durrani, Monis Rahman, Namira Salim, Naeem Ghauri, Rashid Rana and Amin Gulgee also attended the event.Pakistan Power 100 Founder Khalid Darr explained his vision for the Power 100 and its importance. Commenting during the event Darr said, “To build a better Pakistan we need to learn the art of working together, we should seek a new way forward, based on mutual interest and mutual respect.”

Darr’s speech was followed by the awards ceremony where a few selected individuals from the Power 100 list were honoured with special awards for their outstanding achievements in their fields.Abdul Sattar Edhi, who managed to attend the event despite ill health and a hectic schedule, received the Humanitarian Lifetime Award for his lifelong commitment to bettering the lives of all Pakistanis. Edhi also spoke to the audience and his speech was a seminal moment at the event and received a standing ovation at the end, with many of the attendees moved to tears by his selfless and heartfelt words.