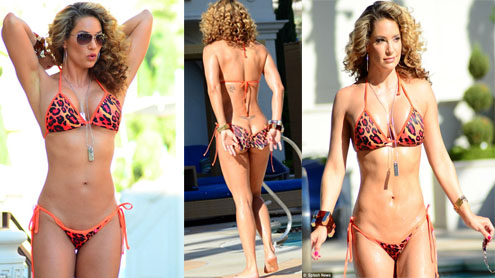 She is known for showing off her amazing bikini body at every opportunity.

But celebrity fitness expert Jennifer Nicole Lee almost showed off more than she intended after her swimsuit bottoms came loose as she lazed around poolside in Las Vegas.She had managed to squeeze her fantastic curves into yet another itsy bitsy teeny weeny bikini, when she suffered a wardrobe malfunction on Tuesday.But it appears all of her training in the gym has paid off, as her quick fire reflexes saw her grab hold of the string of the leopard print bottoms before she was left completely exposed.

The cool 37-year-old hardly raised an eyebrow as she tied them back up before continuing her lounging odyssey at Caesar’s Palace.Model and author Jennifer had swapped the humid heat of Miami for the dry climate of sweltering Sin City.But it was business as usual, as she continued to flaunt her impressive curves for her fellow holiday goers.No doubt some of the chaps at poolside will have been rather disappointed to find she has reflexes that would be the envy of a fighter pilot.

But she was certainly relieved after managing to spare her own blushes.The television personality was crowned Miss Bikini America 2006 when she famously lost 70lbs following the birth of her second child.She has used her inspirational story to launch a fitness empire, publishing several books, workout DVDs and has launched her own swimwear line. – Dailymail