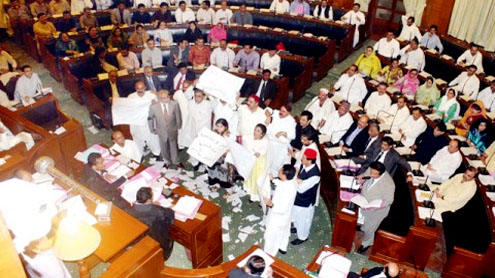 KARACHI: The Sindh Assembly session, convened on a short notice on Monday, adopted the controversial Sindh Peoples Local Government Ordinance 2012 into law amid rumpus and sloganeering by the opposition lawmakers from the erstwhile allies of the ruling PPP.

MPAs from the PML-F, PML-Q, PML-Likeminded, NPP and the ANP, who have parted ways with the PPP government, tore apart copies of the local government ordinance, staged a sit-in in front of the rostrum of the Speaker and chanted high-pitched slogans against the ordinance. Besides, on the call of the nationalist parties, shutter-down and wheel-jam strike was observed in the province against adopting of the local government ordinance. The Sindh Assembly session started with Speaker Nisar Ahmed Khuhro in the chair at 11.45am, about an hour and 45 minutes late.After nomination of panel of chairmen, the Parliamentary leader of the Pakistan Muslim League (Functional) rose on his seat and drew attention of the chair for their application to allot them opposition seats as they already had resigned from ministries.

The lawmakers from PML-F, PML-Likeminded, NPP, ANP and one member of PML-Q, who came with black armband as mark of protest, led by the Jam Madad Ali Khan reached in front of the Speaker’s rostrum and sat down on the floor in protest.The arguments between protesting lawmakers and the Speaker continued until the chair gave the ruling to not allot the opposition seats to them. He linked the grant of opposition seats to receiving acceptance of resignations of the protesting ministers. Speaker Nisar Khuhro said the MPAs from the protesting parliamentary parties have submitted their application with ministers, whose resignations still have not been accepted, so if any lawmaker wants separate seats can submit application.

PPP leader and food minister Mir Nadir Ali Magsi suggested the Speaker to allot the seats to the MPAs so the proceedings of the assembly could be run smoothly. On the suggestion of the PPP leader, PML-F MPA Marvi Rashdi and others wrote separate applications and handed over to the Speaker, who yet again did not accept these for allotment of opposition seats in today’s session. Jam Madad of PML-F said that they submitted their resignations to the CM House ten days ago, but they did not forward to the Governor deliberately, so they also submitted the same to the Governor as they don’t want to be part of the government anymore after passage of the local government ordinance, “which is harmful for the integrity of the province”. Arguments and exchange of harsh allegations amongst protesting lawmakers and PPP ministers continued for quite a while.

The protesting lawmakers, while declaring the PPP traitor of Sindh, alleged that the ruling PPP today established a base for the division of Sindh, for which the people of Sindh will never forget them. The chair overruled the request of the opposition members for allotment of opposition seats and directed them to sit on their treasury seats, so they can participate in the proceedings of the Assembly as their protests and arguments could not be made part of the records of the Assembly.

Following the ruling of the Speaker, the house took up the question-hour which pertained to the minorities’ affairs. Later, the law minister laid four ordinances including Sindh Peoples Local Government Ordinance 2012 amid strong protest and sloganeering by the protesting lawmakers. After completing the agenda, Law Minister Muhammad Ayaz Soomro moved a motion to consider the Sindh Peoples Local Government Ordinance 2012 for making it into law.

Opposition lawmakers, including Jam Madad Ali Khan, Ms Nusrat Sehar Abbasi, Marvi Rashdi, Rana Abdul Sattar and Ghulam Ali Nizamani of PML-F, Amir Nawab and Amanullah Mehsoon of ANP, Masroor Jatoi of the NPP, Shaharyar Mahar of the PML-Q and Abdul Razak Rahimon and Chetan Mal of PML-Likeminded were on their toes, loudly chanting slogans against the adopting of the ordinance into law.

Despite the pandemonium and slogans of opposition lawmakers, Speaker Khuhro, after adopting the ordinance into law, announced that the law has been adopted as no vote recorded in opposition of it. The opposition lawmakers, after the passage of law, boycotted the session and staged a sit-in on entrance of the Sindh Assembly building. After completing the agenda, the Speaker prorogued the Sindh Assembly session for indefinite period. Agencies add: 149 members voted in favour of the ordinance while 18 were in opposition.Shutter-down and wheel-jam strike was observed in various districts across Sindh province on Monday against Sindh People Local Government Ordinance (SPLGO) and prolonged delay in investigation of murder of chairman Jeay Sindh Qaumi Mahaz (JSQM) Bashir Ahmed Quraishi.

The enraged protestors set ablaze at least three vehicles in different areas.The strike call was given by JSQM and other nationalist parties of the province.Shutter-down strike was observed in Tando Mohammad Khan, Dadu, Khairpur, Jamshoro and Mirpurkhas while traffic on the roads also remained thin. Various educational institutions and private offices also remained closed to express solidarity with the protestors.Sindh University, Mehran University and Liaquat Medical University in Jamshoro besides all the educational institutions participated in the strike. The classes remained suspended. However, situation in Karachi remained as usual.

Protest demonstrations were also held in various cities of Sindh and hundreds of people belonging to different walks of life attended the demos. They chanted slogans against provincial and federal governments for imposing SPLGO without consultation with the representatives of all stakeholders. JSQM protestors expressed pace of investigation of murder of their party chairman Bashir Quraishi and demanded bringing the culprits to book.The commuters had to suffer due to absence of public transport and attendance in private as well government office remained thin. Earlier, enraged mobs torched a school bus near Degree College in Sukkur, a trailer in Tando Mohammad Khan and a tanker full of crude oil near Gharo.

Crackers exploded in different areas of Khairpur terrorizing dwellers. No loss of life was reported.President Functional League Pir Pagara has directed provincial ministers and advisors hailing from the party to submit their resignations to the Governor of Sindh. Sources said Pir Pagara was of the view that there has been no change in his stance regarding the local government ordinance, which implies that the MPAs from functional league will sit on the opposition benches in the Sindh Assembly. A man was killed and six others injured during violent protest against Sindh People’s Local Government Ordinance 2012 in Nawazbshah district on Monday.

The protesters, belonging to various nationalists parties, some of them armed opened fire in the air and set ablaze Airport Police Station in Gharibad locality.The protesters rallied on Sakrand Road as they observed strike against the local government system.Police also resorted to aerial firing to disperse the charged protesters who torched some motorcycles and a passengers bus.The dead and injured were taken to nearby hospitals.