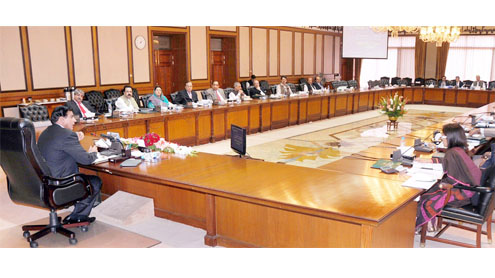 ISLAMABAD: Prime Minister Raja Pervez Ashraf has said the government is committed to address the energy crisis on top priority.

In his opening remarks at the cabinet meeting in Islamabad on Wednesday‚ he said we are making sincere efforts to enhance capacity of Power Generation Plants to overcome energy crisis.He underlined that the government is committed to address the energy crisis on the top priority basis.

The Prime Minister told the cabinet that Pakistan is the first country that registered protest at nation level against the sacrilegious movie and our Government condemned the movie at all forums.He said he was upset to see some miscreants destroying and damaging public and private property on the day of Youm-e-Ishq-e-Rasool SAWW.

However‚ he said at the same time he was happy to see youth were engaged in repairing damage‚ caused by unruly protesters in the country.Raja Pervez Ashraf said President Asif Ali Zardari‚ while discussing Pak-US ties with United States‚ also expressed deep dismay and grief of the people of Pakistan over the blasphemous movie.The Prime Minister said that the Government is extremely sad over the loss of lives in the worst ever industrial disaster in the country. – Onlinenews