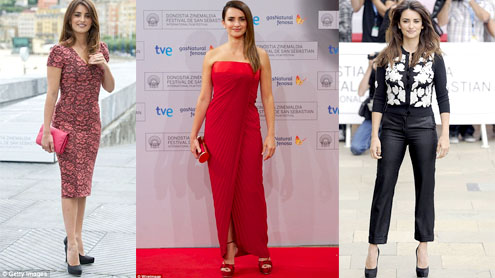 It was another event and another showstopping outfit for Penelope Cruz as she took to the red carpet at the 60th San Sebastian International Film Festival on Tuesday evening.

In her third ensemble of the day, the Oscar-winning actress pulled out all the stops for her big moment at the premiere for her new movie, Venuto Al Mondo.The 38-year-old beauty looked positively red hot in a stunning floor-length rouge strapless gown, which featured an unusual pleated wrap-over style.With the eye-catching shade perfectly complementing the Spanish bombshell’s dark brunette locks and olive skin tone, the ensemble was a match made in red carpet heaven.

Penelope completed her stunning look with a simple side sweep hairstyle, towering red platform heels and a tiny red clutch bag.And the actress made sure to finish off with the best accessory possible, a broad smile.Earlier in the day, the star showed off her killer curves in a form-fitting floral dress as she took to the red carpet at the photocall for Venuto al Mondo in San Sebastian, Spain.

Flaunting her fabulous figure in all its glory, Penelope teamed her gorgeous black and pink dress dress with a fuchsia clutch bag and black stiletto heels.And it would seem Cruz’s fans were particularly thrilled with her choice of outfit, with a group of attendees pulling her in for hugs and photographs.The star was accompanied by director Sergio Catellitto and screenwriter Margaret Mazzantini as they promoted their new movie Venuto al Mondo, or Twice Born, at the festival.

It would seem the trio had struck up quite a bond while shooting the film, with the group all linking arms as they walked the red carpet together.Earlier on Tuesday, the trio attended a screening of Venuto al Mondo, in which Penelope plays Gemma, a single mother who brings her teenage son to Sarajevo, after his father died in the Bosnian conflict years ago.The star opted for a much more casual look for her first red carpet appearance, looking casual yet chic in a monochrome floral detail cardigan, black capri pants and black stilettos. – Dailymail