Lady Gaga showing off her figure in candid underwear shots 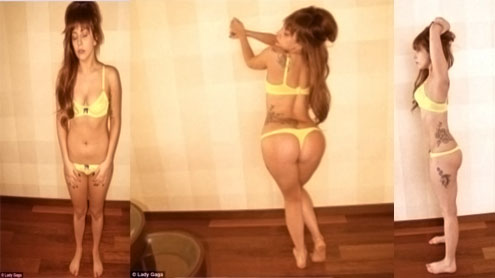 She’s come under scrutiny recently after appearing to balloon in weight compared to her usual slender self.

But now Lady Gaga has found one effective way to hit back at her critics – by posing in just her underwear to completely flaunt her physique.The Poker Face hitmaker posted up four images on her LittleMonsters.com blog on Tuesday.And she even admitted in one caption that she has been struggling from eating disorders since childhood, while also opening up to her fans about her weight.

In an open and personal response to recent attacks on her fluctuating figure, Lady Gaga has posted pictures of herself wearing just a bra and underpants on her social networking site with a caption that reads: ‘Bulimia and anorexia since I was 15.’The 26-year-old pop superstar wrote: ‘My boyfriend prefers me curvier. When I eat I am healthy and not so worried about my looks, I’m happy. Happier than I’ve ever been.’I am not going to go on a psycho-spree because of scrutiny. This is who I am. And I am proud at any size.’

The singer’s public response comes after a series of unflattering photographs made the singer look much curvier than usual while performing on her tour this week, with claims that she had ‘piled on the pounds.’Seemingly appalled, the recovering bulimic, who has admitted to gaining nearly 25lbs, took to social media to launch a sub-section of her site, called Body Revolution.As well as the series of half-naked images, Ms Gaga wrote: ‘But today I join the BODY REVOLUTION. To Inspire Bravery. And BREED some m$therf**king COMPASSION.’

The page continues: ‘My mother and I created the BORN THIS WAY FOUNDATION for one reason: “to inspire bravery.”‘This profile is an extension of that dream. Be brave and celebrate with us your “perceived flaws,” as society tells us. May we make our flaws famous, and thus redefine the heinous.’She also wrote: ‘Hey Guys its Gaga… Now that the body revolution has begun, be brave and post a photo of you that celebrates your triumph over insecurities.’

And she clearly seemed confident in the candid shots which she shared with her Little Monster fans.Gaga can be seen stretching while revealing her body art in all its glory while wearing just a citrus coloured bra and matching thong.In one picture she even shows off her derriere, while she also gives a side profile showing her looking slimmer than she did on stage last week.She also took to the site to thank her fans for helping her over the scrutiny of her weight.She added: ‘My weight loss/gain since I was a child has tormented me. No amount of help has ever healed my pain about it. But YOU have. – Dailymail