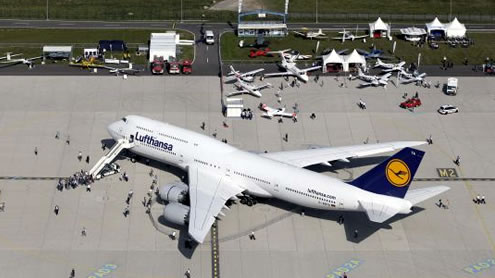 A man who posed as an airline pilot and travelled in the cockpit of at least one plane was arrested in Turin Airport using forged identity cards and wearing a pilot’s uniform, Italian police said on Saturday.

The 32-year-old, whose real name was not released, allegedly created a fake identity as a Lufthansa pilot named “Andrea Sirlo,” complete with a Facebook page that included fake flight attendant friends. Police said they were alerted several months ago after “Sirlo” introduced himself as a captain to a Civil Aviation lieutenant, who became suspicious because he seemed too young for the job. The national military police tracked down the suspect from photos on his Facebook profile, in which he is shown posing in uniform and sunglasses in front of airplanes.

He was arrested in the check-in area of Turin Airport on Friday. Police said “Sirlo” had traveled for free on at least one flight as a “third pilot” sitting in the cockpit. They were investigating whether he had flown as an imposter at other times. Lufthansa declined to comment on whether one of their flights had been involved and said it was a matter for the police. At a press conference, police displayed a white shirt with epaulettes and a black double-breasted jacket with pilot stripes sewn on the cuffs. They said they also seized fake resumes, airline badges and an airport staff parking permit.

Turin Airport said in a statement it had not issued any permits in the name of the person involved. A profile on a website where users can track their flights shows “Pilot Andrea Sirlo” flying from Munich Airport to Turin on Oct. 23, 2011. Munich Airport did not immediately respond to a request for comment. The case recalls the 2002 film “Catch Me If You Can,” in which Leonardo DiCaprio played Frank Abagnale, a real-life con man who is said to have flown more than 1,600,000 kilometers (1 million miles) as a fake Pan American pilot in the 1960s.

‘Sirlo’ is the name of a flight corridor over Turin. – Khaleejtimes