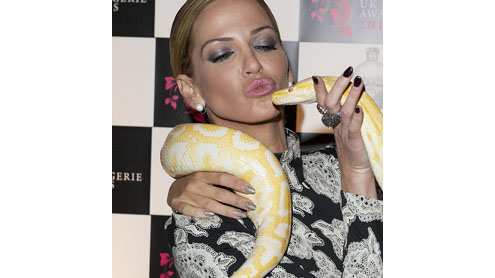 She’s been single for most of this year, but it looks like Sarah Harding has set her sights on a slippery customer.

Luckily, the snake she has fallen for is of the animal kind, and not another romantic mishap for the unlucky-in-love pop beauty.The singer, 30, was seen kissing and cuddling a snake at the UK Lingerie Awards in London’s Mayfair One.Watched carefully by a pretty snake charmer. Harding got to grips with the snake, and was completely at ease with the reptile as it slithered over her body.

The brave singer even puckered up to the snake, and the pair enjoyed a brief kiss.She shrieked loudly when the snake became too much of an handful, but kept up with her own snake charming skills and soon the reptile was back under her spell.Harding wore a striking form-fitting floral printed dress for event on Wednesday evening, and she seemed to be in good spirits – especially when she laid eyes on her new animal friend.

The singer seems to be back on top form after a turbulent few months – she broke up with her long term boyfriend DJ Tom Crane and checked into rehab.She met Dutch fashion buyer Theo De Vries while in rehab, and briefly dated him for two months.The Only Way Is Essex star Maria Fowler wore a tight fitting dress that showed off her ample cleavage, while Lucy Mecklenburgh wore a racy red dress.

Harding and Mecklenburgh met up at the ceremony, posing for a picture together.Lucy wrote on her Twitter page: ‘Me & Sarah Harding at the @UKLingerieAward.’Other celebrities who attended the show included former Atomic Kitten Natasha Hamilton and TOWIE star Mario Falcone. – Dailymail