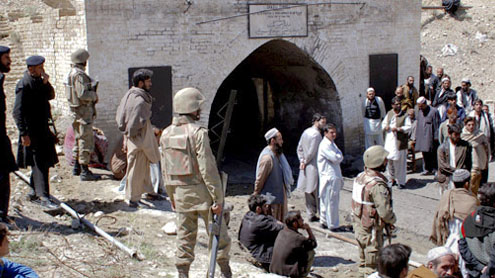 PESHAWAR: The political administration of Orakzai Agency has asked four non-governmental organisations including partners of USAID and Unicef to stop working in the troubled area forthwith, sources say.

They said that the administration through a letter, issued on September 9, directed four non-governmental organisations (NGOs) to stop their activities in the area till obtaining formal permission from Corps Headquarters in Peshawar.The political agent said, in the letter, that the decision to stop the four organisations from working was taken in view of the directives he received from Fata Disaster Management Authority (FDMA) on August 10.

The four persons to whom the instructions had been issued included chief of party Fata Children Project, agency coordinator National Research and Development Foundation, agency health communication support officer Chip Training Consultants and Field Monitor APEX, sources said.They said that most of those organisations had been working in Orakzai Agency for the past one year for which they had been already issued no objection certificates.

Sources alleged that governor and other government functionaries were committed to allow private relief aid organisations but the local authorities created problems for them.The no objection certificates are required by the organisations that take part in early recovery process of the residents of Orakzai Agency but the ones involved in improvement of polio and other immunisation activities stand exempted from the NOCs. According to sources,these organisations have also been working in other six tribal agencies of Federally Administered Tribal Areas and signalling out only Orakzai will affect the child health and immunisation programmes.

Sources said that two of the organisations, which had been carrying out projects with the financial support of Unicef and United States International Agency for Development (USAID), were now trying to get NOCs from the 11 Corps through Fata Secretariat.Official sources in Fata Secretariat said that the move was part of the government’s programme to maintain law and order in the militancy-stricken areas. In such circumstances, the government wanted to tight scrutiny of all those working in development of health, education and other social sectors, they said.

“Genuine organisations will be allowed to work and help the government in the gigantic task of rehabilitation of people affected by militancy,” they said, adding that the government required the services of relief agencies but not at the cost of national security. Officials said that each and every organisation would have to apply for NOC before launching projects in all parts of Fata. The army, which conducted military operations, should know about the operations of the relief organisations to facilitate them in the troubled area, they added. Orakzai Political Agent Khushal Khan, when contacted, declined to comment on the issue. – Dawn