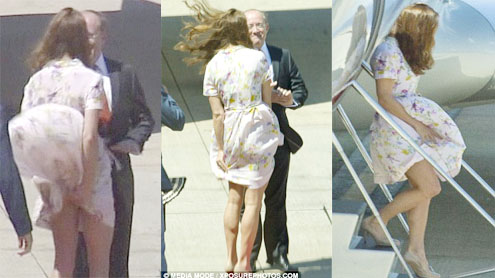 It was not the finale to her Royal tour that the Duchess of Cambridge would have been hoping for.

As she headed for home with Prince William after a highly successful tour of South East Asia and the South Pacific, the Duchess was almost left red-faced at Brisbane Airport by a gust of wind.The stop-over before the long flight to the UK was not a scheduled photoshoot, but pictures of her summery dress blowing up will be among the most memorable of the whole tour.

And coming in the week of the topless photo scandal which has seen the Royals take legal action against a magazine in France, she could really have down without it.What is worse, an Australian picture agency with a photographer on the ground, is believed to be touting stills showing her bottom.Kate and William had stopped over at the Australian airport for a brief two-hour stay, before catching a connection flight to England.

After disembarking from their private jet from Tuvalu to Brisbane, the Duchess had to grab the bottom of her dress to prevent it being blown up by the unruly gust.Following the near embarrassment, Kate opted for a change of outfit, as she was spotted wearing jeans and a white top as she made her way through the airport with William later on.The couple caught a commercial flight back to England with their entourage soon after.Many Australians were hugely excited that the Duchess set foot in their country for the first time but unfortunately there was no formal appearance.

The couple waited in a VIP terminal while their luggage was transferred to the scheduled flight for the long journey back to England.It came the day after the Duke and Duchess of Cambridge won a landmark legal case blocking further publication of topless photographs of Kate.Judges banned French magazine Closer from selling or republishing the pictures and said its decision to use them had been a ‘brutal’ invasion of the couple’s privacy.

However, the injunction was branded a ‘hollow victory’ because more than 500,000 copies of the magazine have already been sold, about 100,000 more then normal.And there were fears that the ruling would do little to halt the worldwide spread of the pictures because the magazine does not own the copyright.A freelance photographer based in France is understood to have taken the ‘particularly intrusive’ pictures and sold them to Closer. He or she is thought to own the copyright.

The French judicial system has so far been unable to discover the name of the photographer.As a result, no injunction banning him from selling the pictures in France or around the world can be put in place.This means that although William and Kate have won their hearing, they have been unable to ban any future sales.The Duke and Duchess will enjoy a few days off before William returns to work as an RAF Search and Rescue pilot in Anglesey. – Dailymail