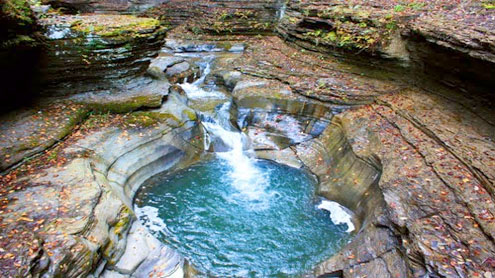 If you’re looking forward to being spell bounded by the magnificence of the Finger Lakes State Parks, then Watkins Glen State Park in USA is the place to go.

The park is the most famous among the Finger Lakes State Parks. If you travel two miles, you will find that the glen’s stream goes down 400 feet past 200-foot cliffs. Adding to its awe-inspiring magnificence are the 19 waterfalls along the course.Dark and damp, with cavernous pathways, alien-like stone formations, rare plants, and eerie isolation, Watkins Glen State Park in USA is the type of setting you would expect to find in a fantasy film rather than Upstate New York. Carved into the escarpment at the southern end of Seneca Lake (the deepest of the Finger Lakes), this hanging valley is the oldest and most renowned State Park in the Finger Lakes region.

The park is easily divided into two sections, the deep shale and limestone glen that the park is most known for, and the upper park, which is filled with picnic, camping, and recreation facilities. Visitors to Watkins Glen State Park in USA start their journey in the lower parking lot, which is actually within the massive mouth of the glen. Here the limestone cliffs tower 200 feet above Glen Creek and the parked cars. Visible from the lot is Sentry Bridge, a CCC-era stone overpass that towers above Entrance Cascade. The first of many waterfalls and bridges within the glen, this scene is eerie; embedded between two sheer cliff-faces, half hidden, almost as if a hint about the wonders to come.

Fittingly, the 1.5 mile-long Gorge Trail starts from a dark spiraling tunnel cut into the cliff-side. It is this tunnel that effectively removes the technology, traffic, and noise of the bustling village and envelops you in a world of natural stone, calming flowing water and gentle breezes. From the first gaze upward at the surreal Glen Alpha, the (recently-raised) gate admission fee is immediately forgotten and a sense of wonder and amazement takes over.

Despite walking on a manufactured pathway, through chiseled tunnels, and over mortared bridges, the Gorge Trail puts you within the glen itself, as close as one can safely get, where you will feel changes in temperature as you progress, get splashed by the refreshing waterfalls, hear the birds singing above the rim canopy, and tread carefully so as not to step on caterpillars and salamanders.

Winding up the glen, the trail leads visitors through an assortment of cliffs and abutments that can best be described as natural sculptures. Each breathtaking scene of Watkins Glen State Park in USA after another is unique in sight and sound, and seemingly isolated from the rest of the gorge.

The trail presents each scene perfectly, as if displaying landscape paintings lined up in a row. The aptly-named Glen Cathedral widens like a gothic church, with a natural pool, dubbed the Baptismal Font, facing the “cathedral’s” pulpit: a beautiful stone arch bridge and 60 ft Central Cascade. There’s no surprise that over the last hundred years or so, each segment of the glen, vista, rock feature, and waterfall has been nicknamed.

Continue on to the Glen of Pools, and what many consider to be the “main attraction”, Rainbow Falls and Triple Cascade. Such a generic name does little justice to this majestic dreamscape. It has to be seen to be appreciated.The Gorge Trail is what defines the Watkins Glen State Park in USA. It is why people come here year after year, and why it is consider being one of the most photogenic spots in New York State.

Outside of the Watkins Glen State Park in USA, the park has trails along the gorge rim that offer more casual hiking experiences with more typical wooded terrain and an abundance of historical and educational markers that help to guide you through the natural and unnatural history of the Watkins Glen State Park in USA. Abundant picnicking grounds and an Olympic-size swimming pool give families a reason stay a while longer, and for those that can’t get enough, the west end of the park has a beautiful campground with restrooms, playgrounds, ball fields, and over 300 modern campsites.

The Village of Watkins Glen should not be overlooked. Steeped in racing history, this Grand Prix town hosted its first road race in 1948 on a course that wrapped around the park and actually crossed Glen Creek. Racing has since moved to its own contained course and hosts amateur and professional circuits, as well as concerts and other events. Other nearby glens, such as Excelsior and Havana, are not as grand as Watkins, but certainly worth the time to explore. – Hina Ejaz