Swaying to the South Pacific beat: William and Kate don grass skirts as they join the tribal dance 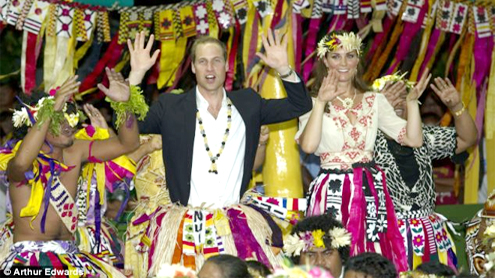 Oh William! He certainly gave it his best shot. But perhaps blessed with his father Charles’s sense of rhythm, the Prince was never going to shine at shimmying on the dance floor.

It was Kate, in grass skirt and flower crown, who was the natural hula dancer yesterday as the royal couple joined in a traditional Polynesian welcome.William and Kate had finally arrived on the tiny island of Tuvalu, one of the smallest and most remote countries on earth and the last stop on their tour.They took part in a fun-filled evening of dancing and celebration before jetting off back to England again today.

At an unusually informal ‘state dinner’ hosted by the island chiefs yesterday the couple threw themselves into the celebrations. According to Kate, William has been secretly practising his dance moves at Kensington Palace in anticipation of being asked to join the islanders.But it was the Duchess herself  who started the royal knees up, putting on her grass skirt and swaying in time to the music, eventually cajoling William into joining her.The prince had unbuttoned his white shirt but left his suit jacket on, while barefoot Kate looked fun and fresh in a long, flowing dress by Alice Temperley.In line with another local tradition, the two were asked to spray perfume on dancers they liked.

The nine coral atolls that make up the tiny nation of Tuvalu, where the Queen is still monarch, boast a population of just 10,000 – but yesterday it seemed that almost all had come out to welcome their future king and queen.The couple arrived by plane and  were carried through the streets on a ‘carriage’ – with a thatched roof made of leaves – that had been  hoisted on the shoulders of 25 strapping young islanders.William greeted their hosts by saying ‘talofa’ or hello and described Tuvalu as the highlight of their nine-day Diamond Jubilee tour, which came to an end today.

The Duke and Duchess of Cambridge have now said goodbye to Tuvalu – and their Diamond Jubilee tour.Today the couple listened to an uplifting singing display before they were presented with a number of gifts on behalf of the country, including colourful woven mats, fans and models of a traditional house village and canoe.A source summed up how the publication and legal battle back in Europe had affected the couple:  ‘From their point of view they were angry when they heard about the photos but once they took the decision to pursue a civil and then criminal action, they were able to put the matter behind them.

Since they set the ball rolling it’s now down to the law to take it’s course.’The source added: ‘They had one objective to celebrate the Queen’s Diamond Jubilee it’s not for us to judge whether that was a success or not, from their point of view they felt able to do her life, and the diversity of the nations she represents, justice.’

Dressed in a colourful summer dress by Erdem the Duchess joined the Duke on the same garlanded carriage carried by around 20 bare chested men that had carried them off their plane the previous day as they processed back to their jet.After a brief wave the royal couple boarded the aircraft and, after the islanders had cleared off the runway, they jetted home to England.The couple are heading to Brisbane in Australia where they will catch a commercial flight back to England with their entourage.

William earlier told their hosts the whole world remembered the warmth of their welcome for the Queen when she visited in 1982. It was one of the ‘iconic images of her reign’.At the end, William summed it up as ‘good, really good – an amazing evening’ when asked by Tapugao Falefou, a senior government official who helped organise the royal visit, if he had enjoyed himself.The rousing event capped a busy but exciting day for the royals who were welcomed with a greeting not seen since the Queen last set foot on Funafuti, Tuvalu’s main island in 1982.The couple later toured the village in their carriage that had been fitted to a large flat bed truck that flew William’s royal standard from its cabin.

It was part of a motorcade that featured a number of 4X4 vehicles and at the front and back had an escort of policemen without helmets riding small motorbikes.Their tour took them to a school and a university and to an exhibition showcasing traditional houses and crafts from across a number of the islands.But the highlight of the visit was the rousing end to the night when the island communities sang in glorious unison to the enjoyment of the royal couple.Before they arrived at the hall the royals enjoyed a banquet fit for two kings at a nearby venue that also saw the chiefs and politicians enjoy the sumptuous meal.

Kate arrived barefoot, as were all the other guests, and had changed into a long flowing dress by Alice Temperley, while William had taken his shoes off to walk on the matted floor but kept his socks on.Sat on two low stools while everyone else sat crossed legged on the floor the royals watched as two men strained carrying a huge platter to the Duke while another pair lifted an enormous spread of food and placed it in front of Kate.

Featured on the menu were raw slices of Paala fish, and a main course of leg of pork and roast chicken, local seafood was served including lobster and fresh clam, while vegetables included lauluu – local spinach -rolled mashed breadfruit with sweet potato leaf stuffing and pumpkin.For dessert were banana fritters and fruits from pawpaw to bananas and utanu tao – baked germinating coconut – but as is traditional there was no alcohol to wash down the food but pii – fresh green coconut juice drank with straws – and iced water.

Like the other guests each of the royals had a waitress sat in front of them waving a fan in case of flies and the Duke and Duchess chatted to the women who pointed out the dishes to describing what they were.The royal couple had earlier arrived on the small cluster of islands in the South Pacific, and were greeted by an enthusiastic 5,000-strong local crowd.

William and Kate’s plane had landed on the tiny strip at Funafuti which doubles as a playground for local children and sports pitch for adults who want to play football or the local game of te ano – similar to volleyball.Thousands of residents from the island and Tuvalu’s other outcrops and atolls lined the runway which receives only a few planes a week, and waved and cheered the procession.Two days of holiday have been called to mark the brief royal visit, but in the laidback tradition of ‘island time’ the previous two Fridays have seen little work done as people spruced up buildings and roads for the arrival of the royals.

The procession stopped in front of a guard of honour and nearby were island chiefs, dressed in colourful costumes, who were waiting to greet the royals along with Tuvalu’s governor general, Sir Iakoba Taeia Italeli, and prime minister Willy Telavi.

A choir of schoolchildren gave a beautiful rendition of the British national anthem as the guard of honour stood to attention. The Duchess wore a sunflower yellow dress featuring broderie anglaise by an undisclosed maker, and her favourite wedges.After the couple chatted with the chiefs, a bare-chested islander wearing a leaf skirt blew a conch shell three times to signal the start of the fatele – a traditional welcoming ceremony – and the chiefs and politicians filed into the Vaiaku Falekaupule, a hall where community gatherings are held.

After taking their seats William and Kate had a necklace of tiny sea shells and wooden beads, called a te pakasoa, placed around their necks and were crowned with a garland of frangipani flowers.Sat at their feet was a man armed with a white handkerchief whose job it was to swat away flies from two coconuts, freshly picked and with straws sticking out of them, which were refreshment.People began to crowd around the edge of the windowless building and a stray dog wandered past one entrance a few metres from the royal couple oblivious to the historic visit taking place.

After a performance by a group of singers and dancers who created an electric atmosphere, with singing that was as deafening as it was rousing, the Duke rose to his feet and described their island nation as the highlight of the couple’s Diamond Jubilee tour.William tried his hand at speaking Tuvaluan and when he said ‘talofa’ – hello – the guests replied in the language.He went on to tell them: ‘Tuvalu and the people’s of these islands hold a very special place in the Queen’s heart. Her Majesty well remembers the warmth of the traditional Tuvaluan welcome she and the Duke of Edinburgh received on the occasion of her last visit to her people in 1982.’

Speaking about the memorable greeting the Queen and Philip received when they were carried aloft in carriages from the Royal Yacht Britannia, the Duke said: ‘Indeed the whole world remembers the reception you gave Her Majesty back then it is one of the iconic images of her reign.‘It is precisely because of the Queen’s deep love for this place and the stories we have heard from her about its great natural beauty, its rich culture and the friendliness and character of its people that Catherine and I have been so looking forward to our visit.

‘It is the highlight of the Diamond Jubilee tour on her behalf, we are very delighted to be here. Your wonderful welcome has to be the most original and quite literally uplifting ever.We will both remember it and the joy and happiness of what has followed for the rest of our lives.’William ended with more Tuvaluan ‘fakafetai larsi’ – thank you very much.Tuvalu is the fourth smallest state in the world after the Vatican City, Monaco and neighbouring Nauru.

The archipelago of nine coral atolls came under British jurisdiction in 1877 and became a colony in 1915.The islands were granted self governance in 1978.Television was only introduced five years ago – allowing islanders to watch William and Kate’s royal wedding last year for the first time.Ifikhar Ayar, Tuvaluan Consul to the UK, said the islanders were thrilled at their visit.’Tuvaluans respect royalty very much. The people have a strong devotion to Her Majesty The Queen.

‘Many Australians are hugely excited that the Duchess is to set foot in their country for the first time but unfortunately there will be no formal appearance.Instead the couple will wait in a VIP terminal while their luggage is transferred to the scheduled flight for the long journey back to England.The Duke and Duchess will enjoy a few days off before William returns to work as an RAF Search and Rescue pilot in Anglesey. – Dailymail