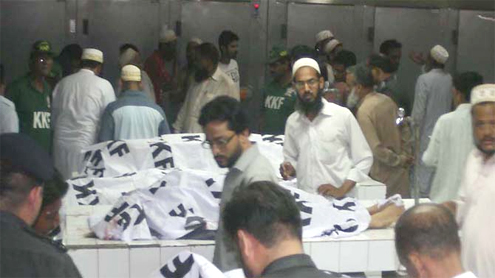 KARACHI: At least seven people, including a three-month-old baby, a 12-year-old girl and a woman, were killed and 22 others injured — the victims predominantly belonging to the Dawoodi Bohra community — when twin blasts rocked a neighbourhood in North Nazimabad on Tuesday evening.

It was perhaps the first such targeted attack against the community to have taken place in the city’s chequered history.The blasts came a day after the visit of Syedi Mufaddal Bhaisaheb Saifuddin, designated successor of Syedna Mohammad Burhanuddin.A large number of the community’s members from across the country and India are visiting Karachi on the occasion. The explosions took place amid the evening hustle and bustle, said a resident of the area.“Six of the dead belong to the Dawoodi Bohra community, while the seventh is an ice cream vendor belonging to Rahimyar Khan,” a doctor at the Abbasi Shaheed Hospital said. Almost all the victims had suffered pellet injuries.

Nooruddin, 45; Fukhurdin, 55; Umema, 12; an unknown woman; Ismail who died during treatment; ice cream vendor Sajid and three-month-old Shabbir, son of Asghar Ali, were killed. The baby’s body was taken away by his family from the hospital without allowing legal formalities, sources said.The explosions took place on a road between two apartment buildings — Qasr-i-Kutbuddin and Burhani Bagh — in Block C of North Nazimabad, commonly called Bohra Compound. Pellet marks were left on the walls of both the buildings.

“At the time, many people, especially youngsters, were on the street buying eatables from stalls,” Mustafa Hussain, a witness, said. The compound has around 600 apartments.“I helped pick up four injured people and put them in ambulances,” said Shabbir Husain, who was wearing a bloodstained shirt.The first blast was huge and the second of a lower intensity, he said.“The first explosion was of a motorcycle rigged with explosives. A few minutes later, another blast took place beneath a tree in a garbage pile,” Karachi West Investigation SP Noman Siddiqui said.

“The motorcycle carrying about 3.5kg of explosives was detonated by remote control,” an official of the bomb disposal unit said. The second blast was caused by an improvised explosive device containing 500 grams of explosives.The motorcycle had been snatched on Sept 3 from the Rizvia area, a police official said.An improvised explosive device (IED) weighing around 25kg had been found at the same place on Aug 13 and defused by police.All markets in Hyderi and other parts of North Nazimabad were closed after the incident.Volunteers from the Bohra community took charge of the situation, cordoned off the crime scene and ferried the injured and dead to hospital. – Dawn