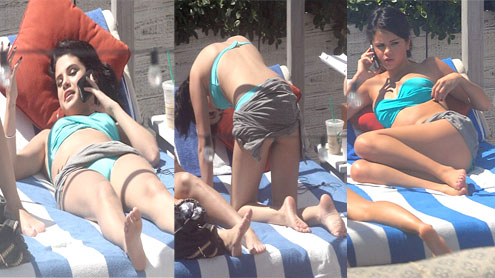 She spent the majority of her time on the set of Spring Breakers in a bikini.And it seems today Selena Gomez doesn’t want the summer to end as she soaked up the sun in sweltering Miami.

The 20-year-old actress was seen perfecting her tan in a teal two-piece while she chatted on the phone and lounged poolside with a friend.Selena flaunted her figure in a bandeau top and matching bottoms, which she covered with a grey skirt.The former Disney star paired gold hoop earrings with her summery ensemble and tied her raven locks back into a ponytail.The actress, who is dating pop star Justin Bieber, was seen sipping on an iced beverage while she chatted with a female companion and took a phone call.Selena recently arrived to the sunshine state from Atlanta, where she was seen late last week filming her new movie Getaway –  a remake of the classic 1972 film starring Steve McQueen and Ali MacGraw.

The re-boot follows protagonist Brent Magna (played by Ethan Hawke) who, with help of a computer hacker called the Kid (Gomez), must get behind the wheel and follow the orders of a mysterious man (Jon Voight) to save his kidnapped wife.Selena certainly has a busy work schedule ahead.

She recently wrapped production on Spring Breakers, in which she plays party girl Faith. The crime drama, co-starring Vanessa Hudgens and James Franco, is out next year.Her voice will grace the big screens on September 28 in animated comedy Hotel Transylvania; and she will share the screen with Eli Ross later this year in forthcoming thriller Aftershock.Selena has also been busy filming comedy Feed the Dog, an adaptation of Ric Browde’s 2000 novel While I’m Dead… Feed the Dog, set for a 2013 release.

Meanwhile it was reported last week Selena and her beau Justin Bieber have purchased some land in Tarzana, California together.A source told Hollywood Life: ‘Justin and Selena are building a massive home together. It’s just a dirt lot right now with some pipes, but it has a gorgeous panoramic view of the San Fernando Valley.’The duo already spend lots of their free time together in The Valley, where Selena’s mother has a home.However, Justin and Selena are said to be building their love nest in nearby Tarzana so the superstar couple can spend more time together. – Dailymail