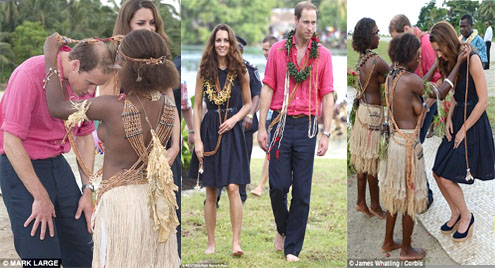 If she had been hoping to put thoughts of the topless furore behind her, Kate didn’t have a chance yesterday.

As she arrived at the tiny village of Marau on the Solomon Islands, she was greeted with a line-up of bare-breasted dancers.And she burst into giggles as the smiling women in grass skirts presented her and William with shell necklaces.William did his best to discreetly avert his eyes but failed spectacularly as he bent his head to receive the necklace.The pair watched as 30 bare-chested women danced in front of them before garlanding them with necklaces made of shell ‘money’ and the teeth of dolphins found washed up on the shore.

After all the anxiety of the last few days, there will be no chance that Kate’s tempted to try sunbathing au naturel again soon. Not that the locals would bat an eyelid.‘They don’t like you to show your legs – people use a sarong – but they don’t mind if you show your “sou-sous”,’ said Pamela Kimberley, co-owner of the island of Tavanipupu, where William and Kate were enjoying a precious few hours of privacy last night, which included dinner served by an Irish chef.

Visitors are welcome to wear ‘anything or nothing’, she said. ‘We don’t care what they do. There is only one rule: no rules.’The couple made their way to Tavanipupu by dugout canoe after a busy day meeting spear-carrying painted tribesmen and women’s groups.They were spending last night in a thatched leaf bungalow, one of only eight on the palm-fringed island.

Their private sanctuary has a bed carved out of bamboo and an outdoor shower. It also has its own jetty, where, after walking barefoot to their room with tropical fruit cocktails in their hands, the royal couple were expected to dine alone out under the stars, beneath a muslin canopy illuminated by lanterns.On chef Paul Carr’s menu was a wide choice of exquisite international and Solomon Islands cuisine, including the island’s own coconut-fed chickens, and freshly-caught ikamata – yellow fin tuna in lime juice – and chilli mud crab.‘The menu that we have tonight, we’ve practised for two weeks,’ the chef said.

The couple’s bungalow sits beside the palm-fringed shore of the 37-acre tropical island in the beautiful Marau Sound lagoon beside the Coral Sea in the Solomon Islands.‘It’s the perfect place for honeymooners… and they’re still in their honeymoon phase,’ Mrs Kimberley said. ‘We’ve had all sorts of requests from VIPs,’ she added.‘People who have wanted to bring  private chefs, fly in furniture and so on, but the duke and duchess are so down to earth. They haven’t asked for one thing.’

Today the couple depart for Tuvalu, one of the most remote islands on earth, on the last leg of their tour.The couple’s bungalow sits beside the palm-fringed shore of the 37-acre tropical island in the beautiful Marau Sound lagoon beside the Coral Sea in the Solomon Islands.’It’s not a huge house. It’s not Buckingham Palace by a long stretch,’ said Mrs Kimberly, co-owner of the island, who has spent $6 million buying and upgrading the resort in the past four years. ‘I really wanted them to feel like they had everything they need. The fridge is fully stocked, the finest champagne, fresh fruit platter, high-tech cappuccino machine… I had a bladeless fan system installed above their bed.’

Out on the pontoon jetty, William and Kate can expect the odd passerby. In the evening there are no motorboats – just people going by in their canoes and often they are singing.They are also expected to go snorkelling before a breakfast of homemade bread, fruit platters and fresh juices to view the huge numbers of fish in the water including blue starfish, dugongs, and the occasional small reef shark.Mrs Kimberly said: ‘The water is pretty safe, though there are reef sharks, but they never come close.’

William and Kate had first journeyed by motor launch to the neighbouring island of Marapa, where they were given a traditional ceremonial welcome by men blowing conches and women standing in the water, splashing rhythmically to produce a drumming sound to attract sharks.Solomon Islanders have traditionally worshipped the shark and when warriors went out on raiding parties to rival islanders, some of the tribesmen would usually swim alongside in shark costumes.

When the royal couple arrived, their boat was flanked by three warriors swimming beneath shark costumes constructed from a wire frame covered with black plastic.William and Kate, who was wearing a navy blue Mulberry dress from its 2012 spring/summer collection, and matching navy Russell and Bromley wedges, stood watching eight bare-breasted women in grass skirts dancing in front of them before accepting the greetings of loin cloth-wearing village elders.

The couple were then decorated with beaded necklaces made of shell money. The colourful necklaces, worth up to £150 each, took three months to make, using romo shells, nut shells – and the teeth of dolphins found washed up on the shore.The Duke was given his garlands by Marie-Claire, 13, and Amelina, 15, and the Duchess received hers from Gealyn, 17, and Batistina, 16.

As is traditional, the girls were bare-breasted, as were more than 30 other women who danced for them. The couple’s 15-minute visit had caused such excitement that people had walked barefoot for up to six hours through forest paths to get to Marau, which is around 60 miles from the capital.The elders then asked William to unveil a new coconut tree, which the villagers will plant to commemorate the royal visit.

Then the couple, accompanied by six warriors and the local police chief, climbed into an ornately-decorated dugout war canoe and were rowed across the 100-yard channel dividing Marapa from Tavanipupu. Just as they climbed into the boats, the heavens opened in a brief tropical downpour.William sat beside Kate, holding an umbrella over her for part of the journey, while a warrior at the front armed with a bow and arrow sang songs and the three accompanying ‘sharks’ patrolled the waters menacingly.When they reached Tavanipupu, the couple were decorated with garlands, as pan pipers played and children danced.The laid back pair had arrived to the island barefoot before walking over quite rough ground.

They were then given fruit juice cocktails and shown to  their room by Mrs Kimberly  – ‘Just how to switch on the lights and aircon, that kind of thing,’ she said.’They have a butler at their call, but he will be on the other side of the gates, so they are totally alone once they are in there,’ said Mrs Kimberly.Among those who were there to see them were, remarkably, a British couple who were stopping off on a round the world tour.

Bill and Sue Redgrove, from Maidstone, Kent, set off from Britain in their 40ft yacht Camomile four years ago, with a plan to spend ten years sailing round the world.The couple, both aged 54, had no idea the Royal couple were on their way to Marau until locals told them about it a few days before.’We couldn’t believe it when they told us,’ said Mrs Redgrove, who had brought the red ensign from their yacht to wave when the couple arrived.

Earlier in the day the Duchess had spoken of the importance of her family with various women’s groups on Honiara, capital of the Solomon Islands.Kate revealed how family life was very important to her especially now she was married during a half hour chat with about 40 women from the Young Women’s Parliamentary Group which was formed a year ago to help address gender inequality in the country.Kate had moved round the group, spending several minutes with each woman, telling them their cause was ‘important’.

The Duchess revealed to Judith Siota, President of the Solomon Islands Christian Association Federation for Women, that her family had become particularly important since she and William married last April.Ms Siota said: ‘We told her all about the work that we do. She knows that the church group puts a lot of emphasis on family and she was interested.’She said that family life was very important to her especially now she’s married.’

She added: ‘There are lots of problems here, family violence against women is a big one and also child sexual exploitation. A lot of women’s groups are dealing with the issue of child abuse to young girls.’It means a lot to us she has come to support our causes.’The group aims to get women’s voices heard in Parliament and also support them in issues like domestic violence and women’s health. – Dailymail