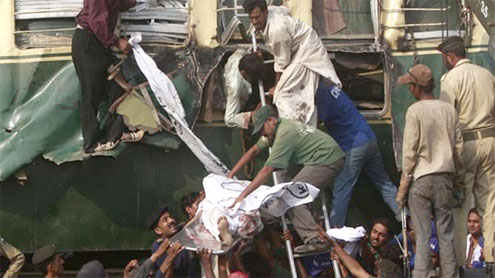 KARACHI: One person was killed and several others injured on Monday when two passenger trains collided near Karachi, Media reported.

Two Karachi bound passenger trains, the Shalimar Express from Lahore and the Millat express from Faisalabad collided near Karachi early on Monday, killing one person and injuring several others.Emergency and rescue teams had reached the site of accident and the injured were being shifted for treatment.

Sources said that fifteen injured passengers had been received at the Jinnah hospital.The Millat express was standing stationery when the Shalimar express hit it from behind.Two bogies of the Millat express toppled as a result of the collision whereas the engine of the Shalimar express was damaged as well.Railway traffic on the tracks was suspended after the accident. – Dawn