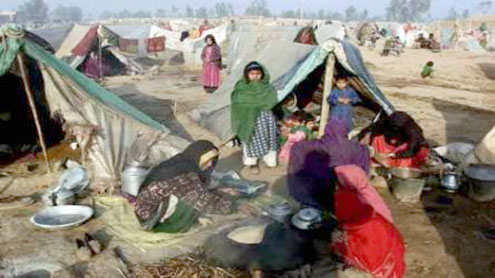 PESHAWAR: The federal government has chalked out a contingency plan for repatriation of registered Afghans refugees in 2013 as they are likely to lose their legal status by the end of this year, according to well-placed sources.

Ministry of Sates and Frontier Regions (Safron) has devised the plan, which roughly requires Rs9.397 billion, for repatriation of 1.7 million registered refugees in the coming year. The Proof of Registration (PoR) cards, issued to 1.7 million Afghan refugees to validate their temporary stay in Pakistan, will expire at the end of current year.“The ministry has completed its homework and will share it with interior ministry, foreign office, UN agencies, all provincial governments and other stakeholders,” said an official. He said that federal government would decide about the future of registered Afghans.

The official said that Safron would approach the federal government and UN agencies to finance the extensive exercise. “The government requires about $250 million for repatriation of 316,008 refugee families,” he said. The cost includes transportation, food, health and administration expenses.The tripartite commission comprising Afghanistan, Pakistan and UNHCR held a meeting in Istanbul, Turkey last week and discussed future of the registered Afghan refugees, who would lose their legal status if Islamabad didn’t extend their stay beyond December 2012.

The meeting thrashed out the current return programme of Afghan refugees from Pakistan and decided that the voluntary repatriation process, through an agreed mechanism, was vital for those vulnerable people, the UN refugee agency said in a statement after the meeting.The statement quoted Safron Minister Shaukatullah as saying that his ministry was presently holding inter-ministerial deliberations to review options for future national policy about Afghan refugees that would be considered shortly by the government.The Khyber Pakhtunkhwa government has already informed all registered and unregistered Afghans that they would not be allowed to live in the province after December. The provincial government has asked them to wind up their business and other activities.

Pakistan, a non signatory to the Geneva Convention, has been sheltering the largest refugee population since early 1980s.Ministry of Safron said that total 1.701 million registered Afghan refugees were still living in Pakistan and an additional 300,000 Afghan nationals had yet to replace their old PoR cards.In addition, about one million undocumented Afghan nationals are also residing in the country, according to the ministry. They were directed in May 2012 to go back to Afghanistan.The UNHCR is vehemently opposing forced return of registered refugees, arguing that owing to security issue and its socio and economic conditions Afghanistan is not in a position to absorb in bulk return of refugees. The UN agency and Afghan government are in favour of extension to the tripartite agreement.

The contingency plan said that voluntary repatriation process was very slow and was also declining gradually. It said that with the present pace of repatriation, the refugees stay in Pakistan seemed prolonged and roughly 100,000 newborns were added to the population of Afghans annually. Officials said that total 280,000 refugee families had returned to their country in 2002 while the number reduced to around 10,000 families in 2011.“If Pakistan government waits for voluntary repatriation then it will take decades,” said an official.

Ministry of Safron said that the recent indications about Afghanistan’s security and economy were very positive and the war-turn country’s conditions were quite suitable for repatriation of the refugees. It said that Afghanistan’s economic growth was impressive with 8.2 per cent GDP while various social and economic indicators were showing progress.

“Since 2002, over five million refugees have voluntarily repatriated to their homeland that shows that situation in Afghanistan is improving,” the ministry argued in its plan. It further said that the drawdown of Nato forces from Afghanistan by 2014 was also a clear indication that Afghans had ability and capability to run their affairs on their own.The ministry proposed establishing of transit camps and de-registration centres in all four provinces from where refugees would get free transportation. Similar facilities would be set up across the country to facilitate the returning refugees. It said that return process was likely to be completed in one year. – Dawn