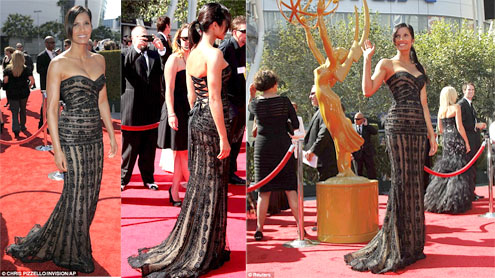 She rarely puts a foot wrong whenever she steps out on the red carpet as she is arguably one of the most stylish women on television.

But last night (Saturday) at The Academy Of Television Arts & Sciences 2012 Creative Arts Emmy Awards that wasn’t the case for Padma Lakshmi.The 42-year-old failed to show off her usually flawless stylish ways when she took to the main event in a dress that appeared to be a size too small.The rear of the dress was brought together with silk lacing detail which exposed small sections of her back.

Wearing her brunette hair back in a ponytail which was loosely curled, the mother-of-one kept her make-up simple and opted to wear a pair of small diamond earrings.Inside the ceremony which was held at the Nokia Theatre in Los Angeles, Lakshmi bumped into comedian Kathy Griffin.

Taking to her Twitter account to share the meeting with her followers, she uploaded a picture of herself with Kathy to her page.The caption on the image read: ‘Me and my Ginger homey, Kathy Griffin.’Padma, who was once married to novelist and essayist Sir Ahmed Salman Rushdie, also took to the micro-blogging site to send her congratulations onto Dan Savage.She tweeted: ‘Congrats to the governors award Emmy winners for their “it gets better” video movement: Dan Savage and Terry Miller!’ – Dailymail