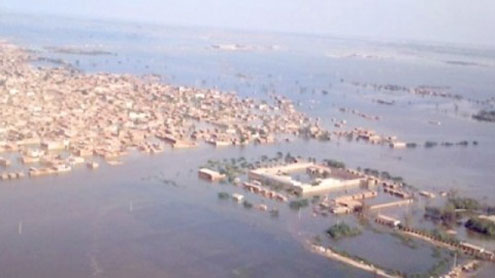 JACCOBABAD: Floods are feared to submerge Jacobabad still due primarily to a 50 foot and 100 foot breaches in Noorwah canal at Tel and Sem Branch canal respectively.

Flood waters are fast approaching the city and the land link with Balochistan is being severed.Evacuatioon of people have begun from Shahbaz Air Base and aircrafts are ready to fly away.Meanwhile floods has wreak havoc and caused immense destruction in Kashmore, Shukarpur, Tangoni and other cities and areas forcing effectees to take reguge on and along Indus Highway.

There is dearth of food and potable water and people forced to live under open skies have become easy prey to diseases.Effectees staged protest rallies in Kandhkot. They blocked the National Highway by putting typres on fire.DCO Shikarpur says that floods and water everywhere are hindering aid works.The situation is the same in Balochistan: Effectees are forced to drink dirty water.

Eleven more bodies including that of a child of people who were acrried away by floods have been recovered from Dera Murad Jamali during 24 hours. In Jafferabad, three more breaches were made to help lessen the ferocity of the flow of 70,000 cusic of water after which land link with Sindh is severed.

In Punjab, Dera Ghazi Khan and Rojhan still remain submerged in flash floods. A village in the vicinity of Choti Zereen was drowned by the flash floods gushing from Suleman Mountain. Lives and well being of people are endangered by epidemic disseases. Khawaja gahreeb Nawaz Trust is busy in aid activities in effected areas particularly D G Khan where it is disributing food to hundreds of families. – PT