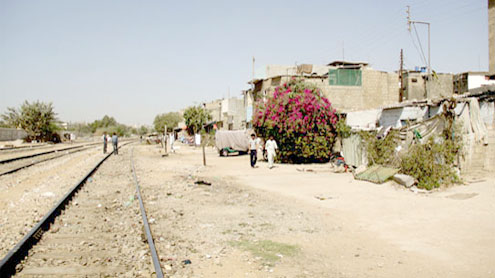 PESHAWAR: The Pakistan Railways has consented to regularisation of an illegal katchi abadi (slum) established on its land in downtown Peshawar decades ago, it is learnt.

Modalities in this respect will be finalised by the provincial government, according to officials.Officials said it was yet not clear if Changarabad katchi abadi residents or the government would pay the railways for the land.They said the railways wanted the government to give land to occupants only after payment was made and a boundary wall around it built to check future encroachments on its land. According to officials, the federal government has made a policy regarding regularisation of nationwide katchi abadis.

Under the policy, the government land occupied since 1985 will be sold to people living on it. Officials said such land could be handed over to occupants on ownership basis after the approval of the relevant government departments.They said the provincial assembly passed a law, ‘The Khyber Pakhtunkhwa Katchi Abadi Act, 1996’ to regularise, develop and improve slums in the province.Officials said the railways had shown its willingness to sell its 50 kanals land adjacent to the City Railway Station in Changarabad area.

They said the Pakistan Railways’ headquarters in Lahore had conveyed it to the Khyber Pakhtunkhwa government that it had no objections to the sale of the said land.Officials said the local government and rural development department had been handling the katchi abadi affairs and coordinating them with Pakistan Railways.They said under the aforesaid act, a directorate would be established for regularisation and development of said kachi abadi and others.When contacted, LG&RDD secretary Orangzaib Khan confirmed the Pakistan Railways’ willingness to sell the Changarabad katchi abadi land.

He said a summary had been moved to the LG&RDD minister for establishment of a directorate to plan the katchi abadi regularisation.“Our director general and his team will make a strategy for purchasing land from the railways and subsequent procedures,” he said.Mr Orangzaib said currently, he couldn’t say anything about future of the land.“Mostly, such land is sold to occupants. Right now, I cannot say anything about the said land,” he said.The secretary said he had written to the relevant federal government authorities to share the findings of a consultancy they had assigned to a consultant to measure the land of katchi abadis and their population in Khyber Pakhtunkhwa.

He said the findings would help make policy on katchi abadi regularisation.Meanwhile, residents of Changarabad katchi abadi said they had been living in the area for around 80 years.“We have heard from our elders that in the beginning, people lived here in tents. Later, tents became mud houses. It was in late 1980s that people began building houses by bricks and cement. Currently, there are a few houses made of mud,” a katchi abadi inhabitant said.

He said all slum dwellers were poor and their earned livelihood by singing songs and selling bangles and cloth.We never paid rent for occupying this land,” he said.Former union council member and representative of katchi abadi Haji Mehboob Akthar Sagar said Changarabad slum was inhibited by around 5,000 people and 3,000 of them were registered voters. – Dawn

ICCI lashes Petroleum Ministry on no standards for refinery industry

ICCI lashes Petroleum Ministry on no standards for refinery industry