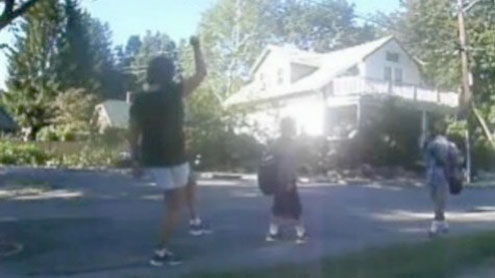 It’s a theory made famous by companies like Target and Staples, which sell the season as “the most wonderful time of the year” in commercials that show parents dancing down store aisles that are stocked with school supplies and clothing.

For one Massachusetts mom, she’s not just dancing in the aisles, she’s dancing in the streets.For the past four years, Tracy Moutafis, of Framingham, Mass., has seen her two children, George, 11, and Angelo, 9, off to school by doing a “happy dance” in the middle of the street as soon as they board the big yellow school bus.Moutafis’s annual dance to “Celebration” by Kool and the Gang has made her a celebrity in her neighborhood and now a star online too. She records her celebratory dance each year, and when this year’s dance was posted to YouTube, it quickly went viral.

“[It was] the first day of school, and I said,’ I’m going to do something fun,'” Moutafis said today on ” Good Morning America” as she explained how the tradition got started.”I just kept doing it for four years,” she said. “I had no idea that something like this was going to happen.”You would think her elementary school-aged children would be a little embarrassed to have a mom dancing in the streets but, according to Moutafis, that’s not the case.”Not at all,” she said.Her children’s ambivalence may not be so surprising, considering they have a mom who dances them off to school.”They’re not mortified either,” Moutafis said. – Yahoonews