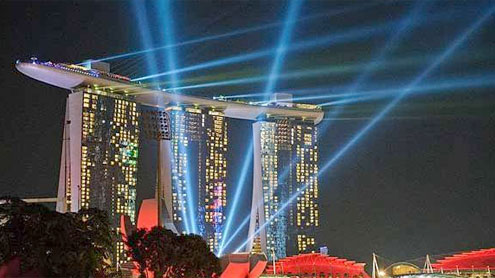 Because Singapore is sizzling as the playground-du-jour. Think the annual F1 Grand Prix night race, glitzy “integrated resorts” and ambitious architectural projects that make the city skyline ever more sculptural.

A deluge of restaurants with pedigree has propelled the city to her newfound status as Asia’s culinary capital, yet affordable street food, such as chicken rice, is available at every turn.

There’s a new generation of hotels – from the design properties developed by local hero Loh Lik Peng to the dazzling Marina Bay Sands, whose open-air pool is on the 55th storey. The city’s biggest news this year has been the opening of Gardens by the Bay, an astonishing new 135-acre “superpark” with an aerial walkway, tropical waterfront gardens, tree-like towers and a 100ft waterfall. Amid all this change, a multicultural and traditional Singapore flourishes.

Weather-wise, there is no “best time” to visit Singapore. Known for its year-round warm and humid weather, the city’s temperature hovers between 24C in the mornings and evenings and about 31C in the daytime. From November to January, the temperature dips slightly with the onset of the wet monsoon season during which it’s wise to pack a brolly.

Singapore hosts the world’s only Formula 1 night race, and come September the city revs up for the event (scheduled for September 21-23 in 2012). Last-minute hotel reservations can be challenging at this time, especially if you want to stay in a hotel sited along the Grand Prix track, but advance planning will stand you in good stead.
Getting there

The only commercial airport in Singapore is Changi International Airport, 12 miles from the city centre. There are three terminals; construction on a fourth will begin in 2013 and is due to be completed in 2017.

To get from the airport to the city, a taxi is the most effective option – and it makes sense dollar-wise if you are travelling in a party of three or four. A metered taxi ride to the city will take you about 20 minutes and cost about S$30/£15 (including surcharges for trips originating from the airport). Additional charges may apply at peak hours and for advance phone bookings, credit card payments and entry into the Central Business District (CBD) during restricted hours.

The Mass Rapid Transit system (MRT) offers a clean and affordable transportation alternative from the airport. Changi Airport station is located in the basement of Terminals 2 and 3. Passengers need to transfer to the westbound train at Tanah Merah train station; the last train service leaving Changi Airport station to facilitate this connection is at 11.18pm.

An airport shuttle service provides transport from the airport to major hotels in the city at a flat rate of S$9/£4.40 per adult (S$6/£3 for children below 12 years old).
Cruises

The 300,000sq ft Marina Bay Cruise Centre Singapore at Marina South has been built to cater to the world’s largest ocean liners, with bigger and deeper berths. It started to receive ships in May, but the official opening will be later in 2012. Until then, the Singapore Cruise Centre at Harbour Front serves regional cruise ships to Malaysian destinations and beyond – such as Thailand and Vietnam, and, from the Tanah Merah Terminal, to nearby destinations in Indonesia such as Bintan and Batam islands.

For a scenic route to Malaysia – and Thailand – consider travelling by rail. Singapore is the southernmost terminus for Keretapi Tanah Melayu (or “KTM”), the railway system that connects Singapore to Malaysia and Thailand. Since the iconic Keppel Railway Station closed in June 2011, the Woodlands Train Checkpoint, which is co-owned by KTM and the Immigration and Checkpoints Authority of Singapore, has become the de facto railway main station in Singapore.

KTM runs several daily trains between Singapore and Kuala Lumpur (a six-hour journey), Butterworth, in Penang (about 12 hours), and onwards to Hat Yai in Thailand. You can also travel by rail to the east coast of Malaysia via Kuala Lumpur, and KTM operates a shuttle service between Singapore and Johor Bahru (“JB”) – this is popular with Singaporeans, who make frequent shopping trips to JB.

If you don’t mind a dent in your wallet, the luxurious Eastern & Oriental Express (0065 6395 0678; orient-express.com) offers a leisurely three-day, two-night journey to Bangkok from Singapore, with a two-hour stop each at Penang and Kanchanaburi. This is one trip you would want to dress up for. – Thegraph