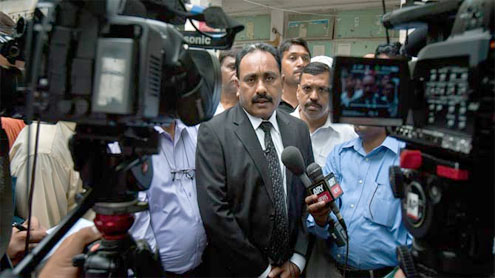 Tahir Naveed Chaudhry the lawyer of a Christian girl

ISLAMABAD: The hearing over the bail petition of the blasphemy accused girl resumed at the court of the Additional Sessions Judge on Friday , Media reported.

Lawyers discussed the bail proceedings of the accused girl.Members of civil society were present outside the court during the hearing.The girl has been in custody since she was arrested in a poor Islamabad suburb more than two weeks ago accused of burning papers containing verses from the holy Quran.

Earlier on Sept 3rd,  the case was adjourned until Sept 7 because of a lawyers’ strike, following a request from the lawyer for the girl’s neighbour Hammad Malik, who had filed the original complaint against her. – Dawn