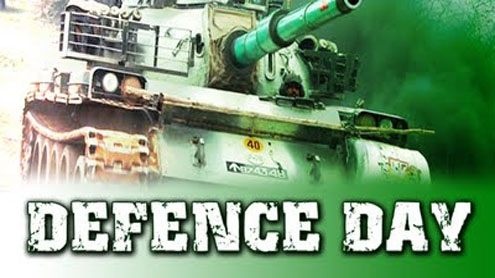 ISLAMABAD: The 47th Defence Day of Pakistan would be celebrated on 6th September (Thursday) with simplicity all over the country with pledges to defend the territorial integrity and sovereignty of Pakistan at all cost.

The day would dawn with prayers in Army Units, Naval Establishments and Air Force Bases for the progress and prosperity of the country.Special prayers would be offered for the eternal peace of the Shuhada, who laid down their lives in defence of the country. Special messages of the services chiefs would be read out to the troops of Army, Navy and Air Force.Wreath-laying ceremonies would be held at the graves of the recipients of the Nishan-e-Haider, the country’s highest gallantry award.

Ceremonies would be held to pay homage to the country’s brave sons who had demonstrated indomitable courage and valour in the defence of the motherland.The President, in a message on the Defence Day of Pakistan, said that Pakistan was a moderate, tolerant and peaceful nation, where political choices were made by the ballot.President Asif Ali Zardari has said that the dark forces of extremism, militancy and sectarianism are posing a serious challenge to the integrity of the nation, but no one will be allowed to endanger its existence.

“Let us, therefore, pledge that we will never allow anyone to endanger our existence as a moderate, tolerant and peaceful nation,” he said.Stressing an urgent need for clarity of purpose and national unity to confront the challenges, the President said that the demonstration of unprecedented cohesion among the people, singularity of purpose at the national level and valour of the armed forces made September 6, a memorable day in the national calendar.He said that on this day in 1965 the people from all over Pakistan and representing all shades of opinion joined hands in standing behind the valiant armed forces in thwarting aggression.

“The commemoration of September 6 revives our spirits and strengthens our resolve to defend the country against all kinds of threats and to be always prepared for any sacrifice for its integrity and honour.”The President also paid homage to the great sons and daughters, who laid down their lives in defending the national frontiers.Prime Minister Raja Pervez Ashraf in his separate message said that 6th September is a day, which represents the nation’s unwavering commitment to unify in the face of challenges.

“I have complete faith in the people of Pakistan and our armed forces. If we maintain unity in our ranks and remain resolute in the face of odds facing us, there is no reason why we cannot defeat the nefarious designs of our enemies and overcome the challenges that confront us,” the PM said.The Prime Minister said, “Let us reiterate our pledge to safeguard our independence and integrity. Let us, focus our energies for the welfare and progress of our people.” – Onlinenews