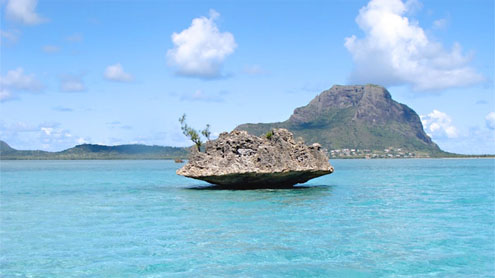 MAURITIUS is rarely seen as a place you go to do things. It’s more of a place to go and do nothing, except relax and get a suntan.

But, faced with stiff competition from other island getaways, the canny Mauritians are eager to prove there’s more to the place than sun, sea and sand. That’s always been a pretty hot combination, really, but if you grow satiated with all three, there’s now a new “s” to enjoy — shopping.And not just for cheap, gaudy fabrics that you wear on holiday then bin when you return to serious life. In the past few years, a handful of shopping malls have opened and attracted top international brands and boutique names from France, the nation’s former coloniser, and India, the source of many of its once-migrant workers.

The Mauritius Tourism Promotion Authority isn’t exactly admitting that tourist numbers have stagnated, but there’s a definite desire to up its game by launching an annual five-week-long Shopping Fiesta. The government also plans to create a duty-free shopping zone next year.If shopping isn’t your thing, don’t despair. The island is a long way from becoming another Sandton-by-the-Sea, and there are more things to do than I’d previously discovered.One new attraction is the Carnival, held for the first time this year to kick off the Shopping Fiesta. It was a fabulous spectacle. As we walked down the main road — well, the only road — in the coastal town of Flic en Flac, we passed vintage cars and dozens of motorbikes revving up for the start.

Residents and tourists  piled onto flimsy corrugated-tin roofs of bars and restaurants, packed onto balconies and lined the streets, waiting for the grand parade. Clowns and furry costumed characters kept the waiting crowd  entertained, while a song played over and over through tinny speakers.

Then the vintage cars appeared, each serving as a chariot for a Miss Somebody or other: Miss Mauritius, Miss Lebanon, and a handful of other beauties. Next came the bikes, revving loudly but losing the tough-guy image when one fell over. Behind them were colourful floats and marching bands, dancing girls and costumed men.There were legs and sequins everywhere, music playing and people dancing in a delightful atmosphere. Then came the finale of beautiful men and women imported from the Rio Carnival in Brazil, wearing masses of feathers on costumes that dazzled as much as their smiles.The paparazzi went crazy, then the streets gradually cleared as festive crowds danced their way onto the beach or into bars.

There are roughly 80,000 cars in Mauritius, according to my guide Dinesh, and I swear that all of them had come to the carnival. We sat for two hours in a traffic jam on the single road through town. Somehw, we didn’t mind too much, still revelling in the wonderful atmosphere of the day.The next day dawned with a drizzle, but that didn’t matter because this quest to discover the alternative side of island life meant the beaches were out of bounds anyway. Today’s attraction was Casela, a nature park filled with birds and a few assorted animals.

For a start, you can do it on quad bikes and the animals are so tame that, when you chug up noisily, they stroll over for a closer look. Tourists taking the safari bus had closer-than-expected encounters with ostrich and zebra, which stuck their beaks and muzzles into the vehicle for bread snacks from its occupants. My favourite animal, a 72-year old giant tortoise, didn’t exactly scamper up to the quad bike with curiosity, but he didn’t mind at all when I climbed off to give him a hug.The two-year-old lions were pretty cool about being hugged too, and you forget they could inflict a bit of damage if their mood swung. One of the rangers showed the red-raw puncture marks in his forearm caused by Ginger. “We were playing, ” he shrugged.

The rangers picked out a lion and each visitor in turn crouched down for a stroke. You can argue about the morality of treating wild animals like pets all you like, but I’m not giving up my photos.Thankfully, our stomachs were well-lined after lunch in the Alchemy restaurant, acclaimed as one of several top-notch restaurants on the island. It’s well named, with the chef making magic from ingredients including foie gras, venison and the ever-present pineapple, this time served in four variations for dessert.It’s an expensive restaurant, like much of Mauritius.It may not leave much money for shopping, but I’d rather be buzzing about on quad bikes, sampling wonderful food and indulging in that old-fashioned hobby of cultivating a glorious suntan. – Khaleejnews