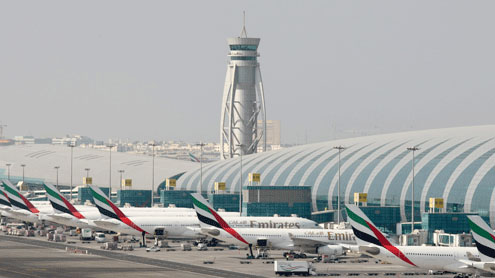 DUBAI: Dubai International began the second half of 2012 on a strong note by surpassing the five million passenger mark in July for the first time in its history.

The previous high for monthly traffic at Dubai International was 4.85 million passengers recorded in January this year. According to the monthly traffic report issued by operator Dubai Airports, Dubai International handled a total of 5,006,155 passengers in July compared to 4,724,109 in the same month last year, reflecting an increase of six per cent. The airport’s year-to date traffic reached at 32,937,794, up 12.4 per cent over the 29,291,927 recorded in the corresponding period last year.

“This is yet another record for Dubai International and one that we had anticipated based on the growth trends in the first half of the year. Since 2009 average monthly traffic at Dubai International has skyrocketed from just under 3.5 million in 2009 to over 4.7 million in 2012. This clearly signals our emergence as a leading global hub,” said Paul Griffiths, CEO of Dubai Airports.

The largest regional traffic growth in July in terms of total passenger numbers was recorded on routes to and from Western Europe (+106,926), Africa (+41,990), the Indian subcontinent (+41,706), and Asia (+40,840). Regions with the highest percentage growth included South America (82.6 per cent), Russia and CIS (38.6 per cent), and Australasia (16.4 per cent). The impact of traffic fluctuations during the Islamic holy month of Ramadan were felt on traffic from AGCC (+0.1 per cent) and Middle Eastern (–9.2 per cent) routes.

‘Despite the effects of a summer Ramadan, Dubai International is continuing to break records as its looks to surpass 50 million passengers this year,” Saj Ahmad, chief analyst at London-based StrategicAero Research, told Khaleej Times.

“With Emirates gearing up services to Washington DC next week, this will further augment growth and with flydubai equally snaring in cost-savvy customers too, these two big incumbent players at the airport will be key catalysts for growth over the coming years,” Ahmad said.

“The airport is leveraging its tourism and resurgent economic expansion to keep passengers coming back and with Dubai seen as a safe and stable city-state, there’s every reason to believe the airport will continue to make and break records,” he added.

“July’s traffic volumes mean that an average of 112 passengers passed through our airport every minute of every day,” said Griffiths.  “By 2018, when we expect to complete the expansion of Dubai International, that will soar to  just under 170 passengers per minute. That is why we are investing $7.8 billion in the future of this airport. In turn that investment will drive an increase in aviation’s contributions to Dubai’s GDP from the current $22 billion to 45.4 billion in 2020,” he added.

Dubai International doubled its annual capacity to 60 million passengers with the opening of Terminal 3 in 2008. Just four years later the airport is once again nearing capacity with 56.5 million passengers projected to pass through the facility in 2012.

Dubai Airports’ Strategic Plan 2020 will boost airport capacity to 90 million by 2018. The next milestone is Concourse 3, the world’s first purpose-built A380 facility, which will boost capacity to 75 million passengers. It will open once it has successfully completed all operational readiness tests which is anticipated to occur during the first quarter of 2013. – Khaleejnews