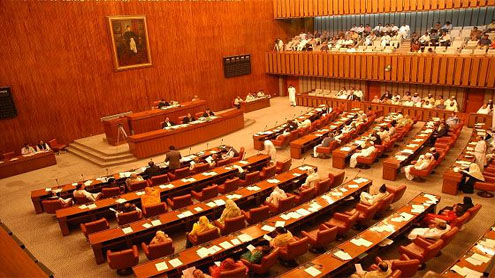 ISLAMABAD: The Upper House of the Parliament is likely to take up issues of grave public interests in its 85th session scheduled to be held on Monday.

These issues include overall performance of Pakistan Railways, government’s steps for provision of speedy and inexpensive justice to people and existing public transport system in the country.As per agenda of available with ‘ONLINE’ MQM Senator Col (R) Tahir Hussain Mashhadi will present three motions under Rule 218 which will ask the House to discuss above mentioned issued in detail.

Mashhadi Chairman, Committee on Rules of Procedure and Privileges will also present report of the Committee on the Privilege Motion moved by Senator Ilyas Ahmed Bilour regarding leveling baseless allegations on him by a Government employee.The House may also consider resolution moved by Farhatullah Babar on 30th April, which called upon the Government to sign and ratify the International Convention for the Protection of all Persons from Enforced Disappearances.

Similarly, Senate will consider resolution moved by Shahi Syed on 30th April which asked the House to recommend that the Government may take effective steps to deweaponize the city of Karachi in view of prevailing law and order situation in the city.Senator Karim Khawaja will move three resolutions calling upon the House to recommend conducting of blood tests of hepatitis B and C, Aids and Thalesimia may be made compulsory for every couple before marriage to avoid spreading of these diseases and asking Government to establish shelter houses for senior citizens and making arrangements for establishment of institute for boarding and lodging of unwanted children in Islamabad Capital Territory.

Col Mashhaid will also move two resolutions asking the House to recommend the government to grant stipends to all the unemployed educated persons in the country and introduce uniform curriculum in all the schools and colleges in the country.He will also seek discussion on his motion regarding Housing Policy of the Government with particular reference to the housing schemes for low paid government employees.