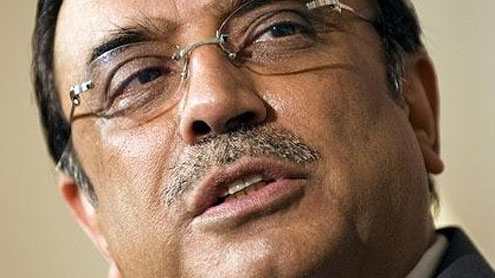 KARACHI: President Asif Ali Zardari Sunday chaired a meeting at Bilawal House, Karachi to review current energy situation and the progress on various measures being taken to overcome the power shortage in the country.

Ch. Ahmed Mukhtar, Minister for Water & Power, briefed the meeting about the latest power situation in the country and said that the various immediate measures taken by the government resulted in reducing the supply- demand gap. He informed the meeting that the power situation was steadily improving and expressed the hope that with the rising water levels in reservoirs as a result of recent rains , the situation is further to improve with regards to power generation.

The Chairman WAPDA briefed the meeting on various hydel power projects including Allai Khwar-Battagram, Jinnah Hydropower-Mianwali, Gomal Zam Dam-South Waziristan Agency, Satpara Dam-Skardu, Duber Khwar-Kohistan, Jabban Hydropower Malakand and Laraib HPP which has a total capacity of 487 MW and would be inducted in the national grid by March 2013.

The meeting was informed that Tarbela Dam was likely to be filled soon while Mangla Dam has been filled to a level of over 1180 feet against a level of 1230 feet.The meeting was also briefed about the progress made so far in the construction of Diamir Bhasha Dam and the efforts being made to garner finances for the project.

Advisor to PM on Petroleum, Dr. Asim Hussain briefed the meeting about the availability of gas and fuel for the power generation.The President urged the Ministries of Petroleum, Finance and Water and Power to work in unison and take concerted and coordinated steps to end electricity and gas load shedding , adding that government can no more afford persistent loashedding as it was adversely impacting the country’s economy.The President directed that he should regularly be updated about the power situation adding that the government accords high priority to improve energy situation. – PT