Lahore rallies in fight against dengue 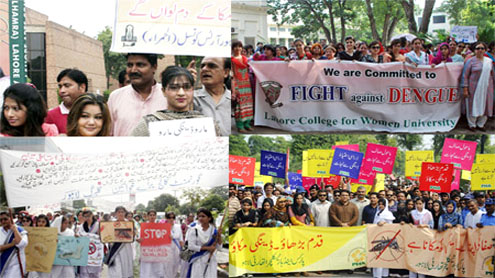 LAHORE: The city observed Anti-Dengue Day on Sunday, organised by the Punjab government with the aim of creating awareness among public about fighting dengue.

The disease claimed at least 350 lives last year.The day was observed in order to encourage citizens to actively participate in the anti-dengue campaign along with the cleanliness campaign so as to divert any possible dengue outbreak.The government’s focus was on theme of collaboration between the government and public for eradication of dengue.The day was marked by different ceremonies, seminars, awareness walks and programmes, held to create awareness about preventive measures against dengue and how to stop breeding of dengue mosquito.

All government departments, non-governmental organisations, universities, schools and colleges organised different programmes and seminars on breeding, prevention and cure of dengue. In this regard, all educational institutions including universities, colleges and schools remain opened and their heads monitored the day’s activities.Posters and banners were displayed at prominent places in educational institutions and camps, and desks were set up at various places for distribution of pamphlets on dengue awareness. People who participated in awareness walks were holding banners and distributed pamphlets and leaflets among the citizens during the walk.

Punjab Chief Minister Shahbaz Sharif also joined the ceremonies and himself distributed anti-dengue awareness pamphlets among cyclists, motorcyclists, and rickshaw passengers. He also joined an awareness walk at Gulberg Centre Point.Speaking on the occasion, he said that the anti-dengue campaign had transformed into a dynamic movement, in which people from all walks of life were participating enthusiastically.He said that in order to control the deadly disease, the Punjab government, elected representatives and people had jumped into the field to fight against dengue, adding that as a result of collective and well-coordinated efforts, the virus had been controlled to a large extent. He vowed to further galvanise the anti-dengue movement.

In addition to the awareness walk, the PBIT also organised a dengue awareness seminar in collaboration with the Lahore Chamber of Commerce and Industry (LCCI) and Punjab Industries Commerce and Investment Department. MNA Pervaiz Malik and Shaista Pervaiz Malik chaired the seminar. Prominent dengue experts also spoke at the occasion and briefed the audience on best preventive methods against dengue. Businessmen, students and Chinese community in Lahore participated in the event.Separately, the Punjab Environment Protection Department (EPD) also organised an awareness walk from Liberty Roundabout to Main Boulevard to educate the masses regarding dengue.